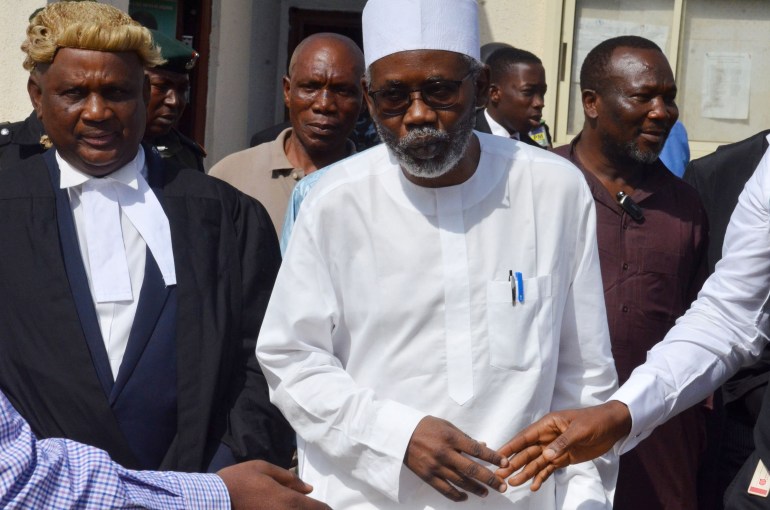 The former Attorney-General of the Federation, Mr. Mohammed Adoke, has pleaded not guilty to the amended charges of money laundering.

Mr. Adoke is being re-arraigned alongside Aliyu Abubakar who is an Abuja based businessman before Justice Inyang Ekwo of the Federal High Court in Abuja.

During sitting on Tuesday, the defendants pleaded not guilty to the 14 count charge filed against them.

The Economic and Financial Crimes Commission (EFCC) had in June filed an additional seven charges against the former AGF over money laundering allegations involving about N400 million.

Mr Adoke’s trial was expected to begin on Monday (yesterday) but it was stalled due to the amended charges.

The initial charge contained seven counts, with six of them relating to Mr. Adoke.

At the resumed trial, the prosecutor, Bala Sanga, informed the court of an amended charge he filed on July 29 which was served on all the defendants.

In the former seven counts, the EFCC alleged that the defendants committed the money laundering offences involving over N400 million in Abuja in September 2013.

In the counts relating to Mr Adoke, he was accused of among others, receiving the dollar equivalent of N300 million from Abubakar, paying the dollar equivalent of N367,318,800 to one Usman Mohammed Bello, and allegedly using the sum of N300 million, which was alleged to be part of the proceeds of unlawful activities, all in violations of various provisions of the Money Laundering Prohibition Act, 2011.

The former AGF was also accused of making “structured cash payments, in 22 tranches” amounting to N80 million, another of such structured payments in 13 tranches summing up to N50 million into his Unity Bank account.

The commission alleged that the funds were not only part of the proceeds of unlawful acts but they also exceeded “thresholds outside a financial institution,” and that the payments were done with the intention of concealing the origins of the funds contrary to Section 15(2(a) of the Money Laundering Prohibition Act 2011 and punishable under section 15(3) of the same law.

He was granted bail by the Federal High Court in Abuja on February 10, 2020, in the sum of N50m with one surety in like sum.

The court has however fixed August 11, 12, and 13 for the trial of the former AGF and Mr. Abubakar.