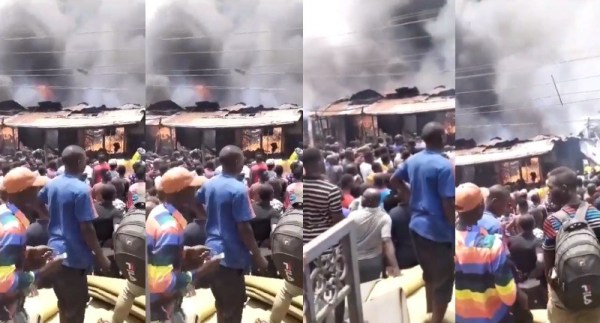 Seven residential buildings and 30 adjoining shops were destroyed on Saturday by a fire that broke out at a market on Ladipo Street, Mushin area of Lagos State.

It was learnt that there was a spark from a wire when power was restored around 1pm. The wire was said to have fallen from a pole on a matress and sparked off the fire.

“Someone tried to pour water on the fire but it fuelled and started spreading,” an eyewitness, Sola Oluremi, told our correspondent.

The fire raged for about four hours before it was put out by emergency responders from the Lagos State Fire Service and the state emergency management agency.

The LASEMA General Manager, Dr Olufemi Oke-Osanyintolu, stated that a crowd that besieged the scene and minimal space among the structures posed challenges in dousing the fire.

He explained that the cause of the fire had yet to be ascertained, adding that no casualty was recorded.

He said, “Upon arrival at the scene of incident, it was discovered that a mattress shop was the initial source of the fire. The flames subsequently escalated to other closely adjoining shops and the joint responders worked together to curtail the inferno from escalating to more adjoining buildings.

“There were severe operational challenges due to huge crowds who failed to comply with authorities and maintain appropriate distance for responders to work freely. The closely-located buildings also proved to be a challenge for curtailing the spread of the fire.”

Oke-Osanyintolu said policemen were drafted to the scene to maintain law and prevent miscreants who might cash in on the incident to steal.

“The affected buildings are a single storey building with six rooms and four shops; five bungalows with 26 shops; and a three bed-room bungalow. Investigation is ongoing to determine the root cause,” he added.

The acting Head of the state fire service, Mrs Margaret Adeseye, said the agency deployed fire equipment from three stations after receiving a distress call from the fire scene at 12.45pm.

She stated, “On arrival, it was discovered that the fire incident involved six bungalows and a storey building used for sales of upholstery and furniture materials. There was no casualty, though the cause is still unknown.

“The Federal Fire Service, LASEMA, Lagos Neighbourhood and Safety Corps and the Nigeria Police Force complemented the efforts of the Lagos State Fire and Rescue Service.”

“It is quite unfortunate to state that trading were ongoing in the market as against COVID-19 protocols that provides for only edible sales for today, Saturday,” she added.