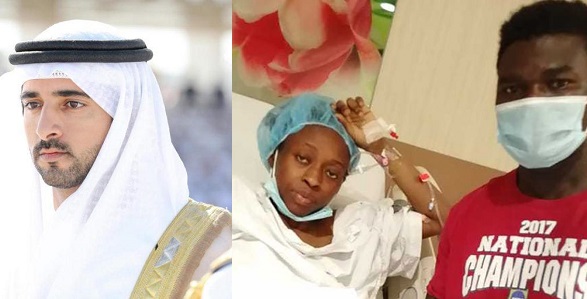 Hamdan bin Mohammed, Dubai crown prince has settled the hospital bill of a stranded Nigerian couple who gave birth to quadruplets in Dubai.

Recall that the Nigerian couple, Tijani and Suliyah Abdulkareem who welcomed their quadruplets at the Latifa Hospital for Women and Children on July 1 had no medical insurance and were indebted to the tune of $120,000.

The couple incurred the medical bill after their babies (two boys and two girls) were placed on ventilators at the neonatal intensive care unit after being born prematurely.

“It’s just a huge favour, and we are still in shock because we didn’t even know how to get the money. I had been sleepless wondering how to pay the bill.”

The 32-year-old father of four who is also a chef thanked the Nigerian community and everyone who assisted his family to pay for two months rent for a bigger place to accommodate the quadruplets.

“We have been getting calls from Portuguese and Brazilian nationals in Dubai. People have been trying to reach us. The Nigerian community has been following us every step of the way.”