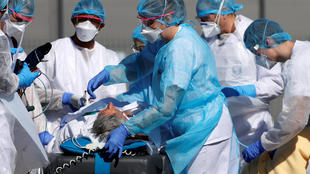 The number of patients with COVID-19 who are in intensive care in hospitals has increased for the first time since early April in France, where health officials have warned circulation of the virus remains “sustained”.

The Directorate General of Health (DGS) announced on Thursday there had been an increase of one patient in the last 24 hours, after continuous decline in numbers since April 9.

Officials have also reported a “marked increase in the incidence” of the disease, with 54% more coronavirus cases compared to the previous week.

On Wednesday, the World Health Organization warned young people that they “are not invincible”, pointing to the growing evidence that coronavirus patients can have long-term health issues.

“Evidence suggests that spikes in cases in some countries are being driven in part by younger people letting down their guard during the northern hemisphere summer,” WHO chief Tedros Adhanom Ghebreyesus said.

There were more than 1,000 new cases recorded on Thursday, and 16 new deaths, with 5,375 people hospitalised, including 381 severe cases in intensive care.

The circulation of the virus remains “sustained with a number of daily cases increasing and exceeding 1,000”, said the DGS.

Officials warned the increase in cases cannot be explained by the increase in testing alone, with the DGS warning that people need to continue observing measures to stop the spread of coronavirus.

READ  I am the chosen one, Eletu of Iruland says

It is necessary “to apply barrier measures everywhere and at all times, to respect physical distancing, to test quickly if there is the slightest doubt, to use StopCovid, and to respect quarantine and isolation measures”, the DGS said.

At least 30,254 people have died from COVID-19 in France since the beginning of the pandemic.