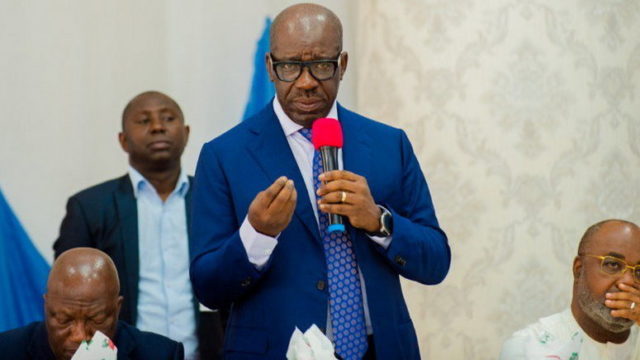 Edo State governor’s wife, Betsy Obaseki, has said that the era of sharing public funds to few individuals in the state is over.

While canvassing support for the re-election of her husband, Governor Godwin Obaseki, yesterday in Benin City, she said that politicians were fighting the governor because he decided to put the interest of the larger Edo people first.

She, however, called on the political actors in the state to embrace peace, noting that development abhors atmosphere of rancour.

FOLLOWING the fracas between the Peoples Democratic Party (PDP) and the All Progressives Congress (APC) at the Oba of Benin palace last Saturday, the PDP has asked President Muhammadu Buhari to call his party leaders in Edo to order to avert further violence in the state.

Chairman of the Publicity Sub-Committee, Edo State National Campaign Council of the Peoples Democratic Party (PDP), Raymond Dokpesi, insisted at a press briefing in Abuja that the APC must be called to order by the president himself and security agencies.

While asserting that PDP would not be pushed into adopting violence as a campaign strategy, founder of DAAR Communications told newsmen that the party could not also be intimidated by attacks by suspected APC thugs.

However, Edo-born businessman, Hosa Okunbo, has distanced himself from the degrading treatment of Obaseki and his entourage at the palace on Saturday, saying a man of his standing would never be a party to any plot to humiliate the governor.

The commercial pilot and philanthropist, who condemned the political thugs that booed Obaseki at the palace, said his mission to the palace that day was completely apolitical.
FORMER national chairman of APC, Adams Oshiomhole, says the PDP has chosen to focus on his past political comments instead of presenting its achievements and plans to the people of Edo.

Speaking yesterday when he joined the APC governorship candidate, Osagie Ize-Iyamu, to receive Edo Youth Solidarity Movement, Oshiomhole said: “They cannot display their achievements because they don’t have any. They have decided to focus on Oshiomhole, who is not the ballot.

“Ize-Iyamu is a good man with genuine plans to move Edo forward. He has the support of all and is on his way to repeating the 2012 feat of winning in all 18 councils of the state as I did when he was my campaign DG.”