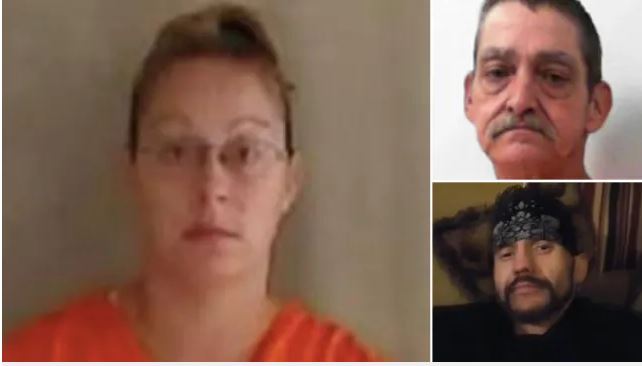 A woman alongside her father have been arrested for killing her boyfriend and burying him in a shallow grave.

An incestuous daughter has admitted helping her father kill her boyfriend, before having s3x with her dad and illegally marrying him.

Amanda McClure, 31, and her father Larry McClure, 55, tied Thomas McGuire, 38, up, battered him over the head with a bottle of wine, injected him with two vials of crystal meth, then buried his body in a shallow grave. Larry McClure also described how their victim was strangled.

She admitted murdering McGuire on July 8 at a court hearing in Welch, West Virginia on Monday. She also testified against her sister Anna Marie Choudhary, 32, who is also charged with McGuire’s murder.

Amanda and Larry got married around a month later despite it being illegal. Investigators have yet to reveal a motive for McGuire’s killing, and say that both Larry and Amanda McClure have given different motives.

Larry McClure claims Amanda was the ringleader, and said Anna Marie had been involved in the murder as well.

McGuire’s body was discovered buried in a shallow grave close to the McClures’ rented home in Skygusty, West Virginia, in September 2019.

Investigators made the grim discovery after Larry McClure, who is a registered sex offender, disclosed details of the murder to police, according to the Bluefield Daily Telegraph.

He subsequently wrote a letter to court officials confessing to the crime, and providing details implicating his daughters.

Amanda McClure is currently being held in a prison in Chisago City, Minnesota, while she prepares to testify against her sister.

Anna Marie Choudhury is in custody awaiting trial in Boone, North Carolina, while the women’s father remains in jail in Welch, West Virginia. A date for the McClures’ sentencing has yet to be set.