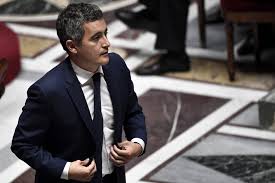 “When I hear the term ‘police violence’, personally I choke,” said Gérard Darmanin, whose predecessor lost his job three weeks ago after becoming embroiled in a controversy over police use of a restraint method known as a chokehold.

Deaths in custody of two men of African origin in separate incidents sparked widespread fury and led Darmanin’s predecessor Christophe Castaner to ban police use of the chokehold.

But Castaner had to backtrack in the face of protests by the police and was later replaced.

“The police do exercise violence, but legitimate violence,” Darmanin told a committee in the National Assembly.

Darmanin’s appointment earlier this month outraged feminist campaigners as he is facing a renewed investigation into a 2009 rape allegation — which he denies.

His use of the word “choke” concerning police violence was widely criticised by his opponents on social media.

Darmanin and President Emmanuel Macron visited two police units in Paris earlier and announced a 10 million euros ($11.7 million) funding boost in a move designed to show solidarity with the force, according to the presidency.

Police in France have been contending with regular demonstrations by anti-government “yellow vests”, groups opposing pension reforms and those angry at perceived racism in France generally and among the police in particular.

Macron has promised a night work allowance for France’s police force, after officers demanded greater government backing in the face of protests over claims of brutality and racism in their ranks.

On the surprise late-night visit to two specialised police units in the French capital overnight Monday to Tuesday, Macron promised a budget of 10 million euros ($11.7 million) for officers who work at night, the interior ministry announced.