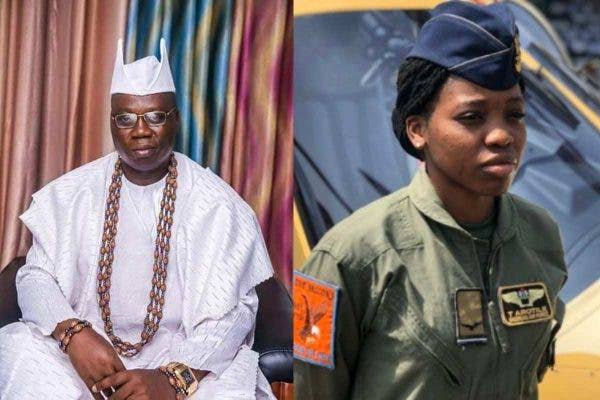 Aare Onakakanfo of Yorubaland, Iba Gani Abiodun Ige Adams, has reacted to the sudden death of Nigeria flying officer, Tolulope Arotile. Gani alleged that the circumstances surrounding her death looks suspicious to him.

This comes few hours after the deceased elder sister, Damilola Adegboye, said the family is not satisfied with the circumstances surrounding her sister’s death.

She demanded that an investigation into the circumstances surrounding the death of her sister be carried out by the Nigerian Air Force.

Recalling that the Nigeria Air Force (NAF), in a statement, revealed that Nigeria’s First female combat helicopter pilot, Tolulope Arotile, died as a result of head injuries she sustained from a car accident at the Nigeria Air force Base in Kaduna.

Gani Adams made known in a statement released by his Special Assistant on Media, Kehinde Aderemi, that Tolulope’s death is suspicious and needs to be investigated by the Federal Government.

While commiserating with the family of the deceased, Adams also urged the International Community, the United Nations, European Union, United States, and Britain to investigate the circumstances surrounding the death of the young and promising girl. He said;

“Nigeria has lost one of its best brains in the military in such a suspicious circumstances. The late Tolulope Arotile’s short span in life was remarkable, with a track record of being the first female combat helicopter pilot. The best we can do as a nation is to get to the root of the circumstances culminating in her death”

“As far as I am concerned, reports of her death remained suspicious to me because her death has raised many questions.”

“How would such a promising, young girl be killed by a reversing car within the premises of the barrack?

Who drove the car?

What was his or her name?

Where was the suspected killer at the moment?

And what is the present situation?

We will like to know, and that is why I am charging the International Community to investigate and look into the circumstances surrounding her death”

“I take an exception to believe the story surrounding her gruesome murder. Her achievements speak volumes, and many in the system may see her rising profile as a threat to the establishment, mostly with her passion towards ending the dangers of the dreaded Boko Haram and bandits terrorizing the North-west and the rest of the country”. ”

I feel the pain of a father whose daughter’s shining light went dim unexpectedly. The sadness of losing a promising girl like Tolulope was eternal to her family, because of her talents and dedication to duty, so it should not go the usual way, where our best brains died without any investigation being carried out”

“Tolu’s father said he spoke with his daughter, by 1 pm, and by 5 pm, a few hours later, she was reportedly killed by a reversing car and was in the mortuary.

That story needs to be investigated because her case is one out of the many deaths of great Nigerians that made positive impacts toward making Nigeria great, and that is one of the reasons people of excellent and exceptional brains find it difficult to serve the country,and they are all over the world doing great”

” I have traveled across the world, and I see many Nigerians doing wonderfully well in their respective disciplines. Still, they always feel reluctant to come back home, because of the way we treat our best brains, I think this is too bad for the development of our nation.

More so, I share in the grief of the family as I pray God to give the family the fortitude to bear the loss”. He said.