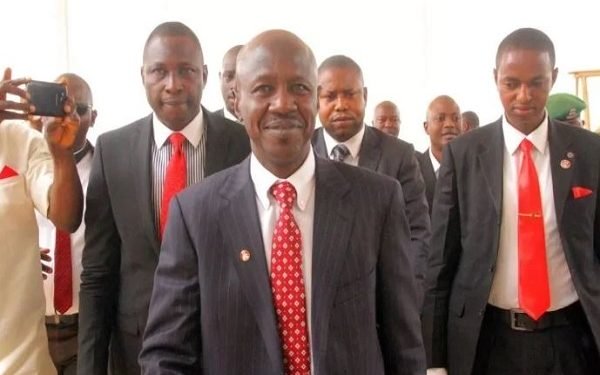 Since July 6 when he was dragged before the Justice Ayo Salami Presidential Investigative Panel, Magu has been held at the Force Criminal Inestigation Department (FCID).

His lawyer wrote to Inspector-General of Police Mohammed Adamu requesting bail for him but the IG yesterday replied that he did not authorize Magu’s detention.

He advised him to redirect his request for bail to the Presidential Panel for appropriate action.

Hours later, Magu was released to reunite with his family.

“It is not a personal fight. Whether I am the EFCC Chairman or not, the anti-corruption war must continue.

“What I have gone through is a case of dog eats dog but I see it as one of those risks of the job. We must not give up”.

On the allegations against him, he said: “They are nonsense, they are mere trumped up allegations to tarnish my image and that of the EFCC. I did not steal or divert or convert funds to private use. I read the allegations and I was shocked.

“I thank Nigerians for their support, they should not be discouraged. I am happy to be back, I believe the war against corruption is winnable.”

There were fears of a major shakeup in the EFCC following the suspension of the Secretary to the Commission, Mr. Olanipekun Olukoyede and 11 other top directors.

Earlier in the day, Magu had written to Justice Salami requesting to be given a copy of the allegations against him.

He also said all the allegations in the media were false and aimed at rubbishing his stellar performance at the EFCC.

He said when his house was searched on Monday, nothing incriminating was found.

Magu in his letter, alleged “publications prejudicial to the proceedings of the panel.”

He said he was being maligned in the media on allegations that were not before the panel.

He said matters which never featured in the proceedings of the committee were being peddled.

The letter added: Our client confirms that his house was searched last Monday in his absence while in custody but no incriminating evidence was found.

“It is untrue as reported that some dollars and expensive jewelry and wrist watches were found.

“Our client states that the search into his house did not reveal any incriminating evidence or materials. The cars removed from his residence were official vehicles assigned to our client as Acting Chairman of EFCC.

“Our client observes that rather than being afforded copies of the allegations against him, some of these allegations are flying round on social media platforms with prejudicial consequences.

“Our client requests that these allegations be formally served on him to enable him to respond immediately.

“Based on the above circumstances, our client was not given adequate time and facilities for his defence and his demand for a copy of the allegations against him has not been honoured till date.

“We appeal to the Honorable Panel to consider the above and uphold the Fundamental Right to fair hearing of our client. Kindly find attached copies of these newspapers for ease of reference. Please accept our best professional Regards.”

It was learnt that the suspension of the 12 officers was affected through the Office of the Attorney-General of the Federation.

Although the EFCC kept the list of the officers under wraps, some of those affected were in the Legal, Account, Assets Recovery and Management and about five crack investigators in the Directorate of Operations.

Some of the top officials are Zonal Command heads of the EFCC.

A top source, who spoke in confidence, said: “About 12 senior management staff were suspended on Tuesday night by the AGF and Minister of Justice. We were served the letters of suspension yesterday.

“They claimed that it was in respect of the ongoing probe of the activities of the commission under the administration of the suspended Acting Chairman of EFCC, Mr. Ibrahim Magu.

“It is unfortunate that most of those suspended had no direct involvement in the administration of Magu in the EFCC. None of us has been queried before now.

Inspector-General Adamu said Magu was detained on the directive of the Presidential Investigation Committee.

Adamu made the clarifications in a letter to Magu’s counsel, Tosin Ojaomo, dated July 14 and signed by his Principal Staff Officer, DCP Idowu Owohunwa.

“The Inspector-General of Police directs that your attention be drawn to the fact that the Nigeria Police Force is not investigating CP Ibrahim Magu( your client , and he is accordingly not being detained by the police but by the Presidential Panel that is investigating the activities of the Economic and Financial Crimes Commission (EFCC).

“The Inspector-General of Police, therefore, advises that you consider redirecting your request to the chairman of the Presidential Panel for appropriate attention.

“I am to convey the assurances of the warmest regards of the Inspector-General of Police, please.”