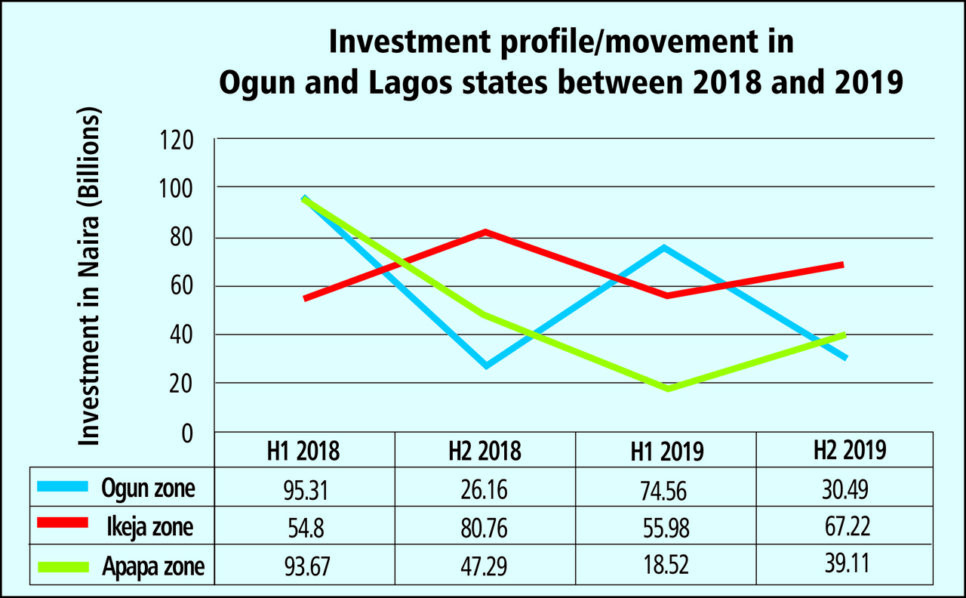 From Ogun State, manufacturing activities and investments may be returning gradually to Lagos owing to the parlous state of infrastructure in the former and the likelihood of ease of market access in the latter.

Lagos had five years ago, lost the position to its neighbour when many of its industrial estates were being converted to religious and event centres as well as residential areas.

Ogun State overtook Lagos as Nigeria’s leading industrial hub, with virtually all the large enterprises in Lagos having a factory in the state. But the state has been hard hit by insecurity, poor infrastructure and revenue-driven regulatory agencies hampering investments, according to investigations.

The tide may be changing for Lagos, has witnessed growth in gas pipeline networks to industrial estates, thus increasing electricity supply to some areas and an easily accessible market for consumer goods devoid of inter-state logistics challenges.

With decaying road infrastructure and the imposition of multiple levies on industrial firms in Ogun and other neighbouring states, Lagos has begun to witness a change in fortune as latest data from the Manufacturers Association of Nigeria (MAN) show that capacity utilisation has grown in factories in Lagos, even as the state attracted the highest level of manufacturing investment in 2019, ahead of Ogun State.

Despite nearness to the country’s land borders, challenges of infrastructure in one of Lagos/Ogun industrial clusters, Agbara Estate, continue to put billions of investments at stake as well as non-oil export to neighbouring West African countries.

According to local manufacturers within the estate, top on the priority list would be the need to improve the road infrastructure, adding that without the adequate and efficient infrastructure to support the movement of goods and services, industrial firms would continue to struggle to survive.

For many of the operators, they have had to resort to self-help by fixing some access roads leading to their factories, but a long stretch remains in terrible shape, leaving operators to the mercy of street urchins and local government officials who extort and harass trucks for levies.

For residents, the situation has been compounded with access roads from the Lagos-Badagry Expressway equally failing, thus increasing travel time and cost, with many resorting to living with friends and families during the week and coming home at weekends.

Though Ogun zone maintains the profile as investment destination hub of Nigeria, in 2019 alone, investment between the two states hovered around N200 billion, with Ogun taking the fair share in the first half of 2019 and Lagos, overtaking in the second half of same year.

Estimated cumulative manufacturing investment from 2013 to the second half of 2019 was N5.05 trillion based on data generated from surveys conducted by MAN over the period.

According to stakeholders, the change in fortune for Ogun State may not be disconnected from the parlous infrastructure in its industrial estates and slow-paced construction works on the Lagos-Badagry Expressway, leading to Agbara Estate, Lagos-Abeokuta expressway leading to Ota/Agbara axis and the Lagos-Ibadan Expressway.

Recently, Procter& Gamble, located in Agbara, which was until July 2018 United States’ biggest non-oil investment in the country, wound up its investment. For other multinationals, major production lines have been moved to new factories at the Sagamu end of the Lagos/Ibadan Expressway.

With the torrential rains in Lagos and neighbouring states at present, a journey to the industrial estate takes an average commuter, via public transport about five hours, as commuters manoeuvre through the huge gullies caused by erosion, as road construction on the Badagry Expressway appears to have grounded to a halt.

When The Guardian visited the estate last week, the journey which should not take more than 45 minutes from Iyana Iba to Agbara industrial estate, lasted about three hours, outside of the trip from Oshodi to Iyana-Iba.

While manufacturers operating in the area declined comments on the matter for fear of being targeted by the government, the Acting Director-General of MAN, Ambrose Oruche, said members have always called for improved infrastructure over the years.

According to him, the roads in the estate are terrible and deter investment, adding that when access roads to factories are limited and in a bad state, the challenges are overwhelming and increase the cost of production.

“From difficulty in accessing raw materials due to bad roads to vehicles that have to be repaired routinely, you cannot plan production. Lean manufacturing as advised cannot be practised in that area. Capacity utilization remains low because it has become difficult to get products to the factories. Cost of production in the area is very high, alongside the wear and tear of vehicles. We have written and visited the government and all we get is assurance without action,” he added.

He added that export profile has also been affected as the hurdles to get consignments to the border remains challenging.

“I know the government does not have what it takes to address the situation now. It should embrace public-private partnerships in addressing infrastructure deficit. Tax rebates can be given to ensure that the infrastructure is put in place. It is a win-win situation for everyone rather than going for cheap loans,” he added.

Director-General of the Lagos Chamber of Commerce and Industry (LCCI), Dr. Muda Yusuf said it was regrettable that while the government talks a lot about supporting the manufacturing and promoting industrialisation, the reality tells a different story.

He noted that it was not easy to resort to self-help in matters of road infrastructure, unlike power or water supply in which companies could provide alternatives.

“For manufacturers in these estates, the situation presents a nightmare. It compounds the problem of high operating cost, impacts negatively on productivity and weakens the competitiveness of these industries. Yet, there is so much rhetoric about industrialisation and economic diversification. It is a depressing situation.

“These industries pay taxes running into hundreds of millions of naira to government. Regrettably, because of the warped structure of our federation, the bulk of these taxes end up in the federation account to be shared by all tiers of government. There is no structure to ensure that a portion of the revenue generated from such industrial hubs is invested back to create a conducive physical environment for the industries that generate these revenues,” he added.

In terms of capacity utilisation, Ikeja zone, described by MAN as the industrial hub of the nation increased to 70.8 percent in the second half of 2019 from 67.6 percent recorded in the corresponding half of 2018; thereby indicating 3.2 percentage point increase over the period. It also increased by 2.7 percentage point increase when compared with 68.1 percent recorded in the preceding half.

He said the only thing they had in Ilupeju and Amuwo Odofin industrial estates were accessible road networks that made the movement of goods and services easy.

“I have been living in this estate for five years and because of the single bad road, it has been terrible living here. I do not take my car out except I have to take my family out. The Agbara Road is a Federal road and I do not know why it is taking so much time to fix. The road is the old Sokoto road and it takes you all the way to the express and to other States,” he said.

He added that since the visit of the Vice President, Prof. Yemi Osinbajo, two years ago when plans were announced to work with the Ogun State Government to improve the situation, nothing had been done.

Ojedokun noted that former Governor of Ogun State, Ibikunle Amosun claimed he was the one who fixed the road, even though companies in the estate jointly fixed the road.

A staff of Primera Foods Nigeria Limited, who spoke on the condition of anonymity, said it had been hell going in and out of the estate as the road network was in a very bad state.

He added that rather than fix the road; there had been blaming game on whose responsibility it was to construct the road.

A truck driver, Innocent John, said he had to sleep on the road just to make it down to the factory on time to pick inventories for distribution, saying that a lot of man-hours were being wasted every other week.

He stated the urgent need for the Federal Government to address the problem, noting that he spent so much time and money to repair his truck due to the damages caused by the bad road.

Another truck driver, Mba Dominic, said truck drivers are faced with two major challenges, which he listed as the deplorable road network and extortion from illegal government officials taking advantage of the poor state of the road to stop truck drivers on the highway.

He said he spent nothing less than two hours to get into the estate from Agbara Roundabout, a journey he said would not take 30 minutes on a smooth road.

According to him, he spent close to N15, 000 to tip road touts just to get to Agbara Roundabout, stressing that truck drivers spend more depending on the journey.

“If the road is good, these road touts cannot stand in our way. We spend about two hours just to get to Agbara Roundabout, but prior to this time, we spent 30 minutes getting to the same Round about. If you going on this road, you will see bolts and nuts of trucks on the road because the road is not good, the truck is being damaged by this road and as you can see, there are some broken trucks,” he said.