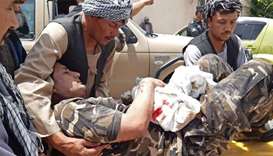 A car bomb claimed by the Taliban exploded Monday near the offices of Afghanistan’s intelligence agency in the north of the country, wounding dozens of people, officials said.

The insurgents described it as a “complex attack” involving a suicide bomber in a car, with reports of ongoing gunfire.

“We also have reports of gunfire from the area.”

Witness Waseh Suhail said gunshots could still be heard inside the National Directorate of Security compound.

“It was a huge explosion that broke all our windows,” said Haseeb, who only gave one name, a government employee working nearby.

“Many people have been wounded by flying pieces of glass.”

In recent months, the Taliban have carried out near-daily attacks against Afghan forces even as the government prepares to engage in peace talks with the militants aimed at ending the country’s decades-old war.