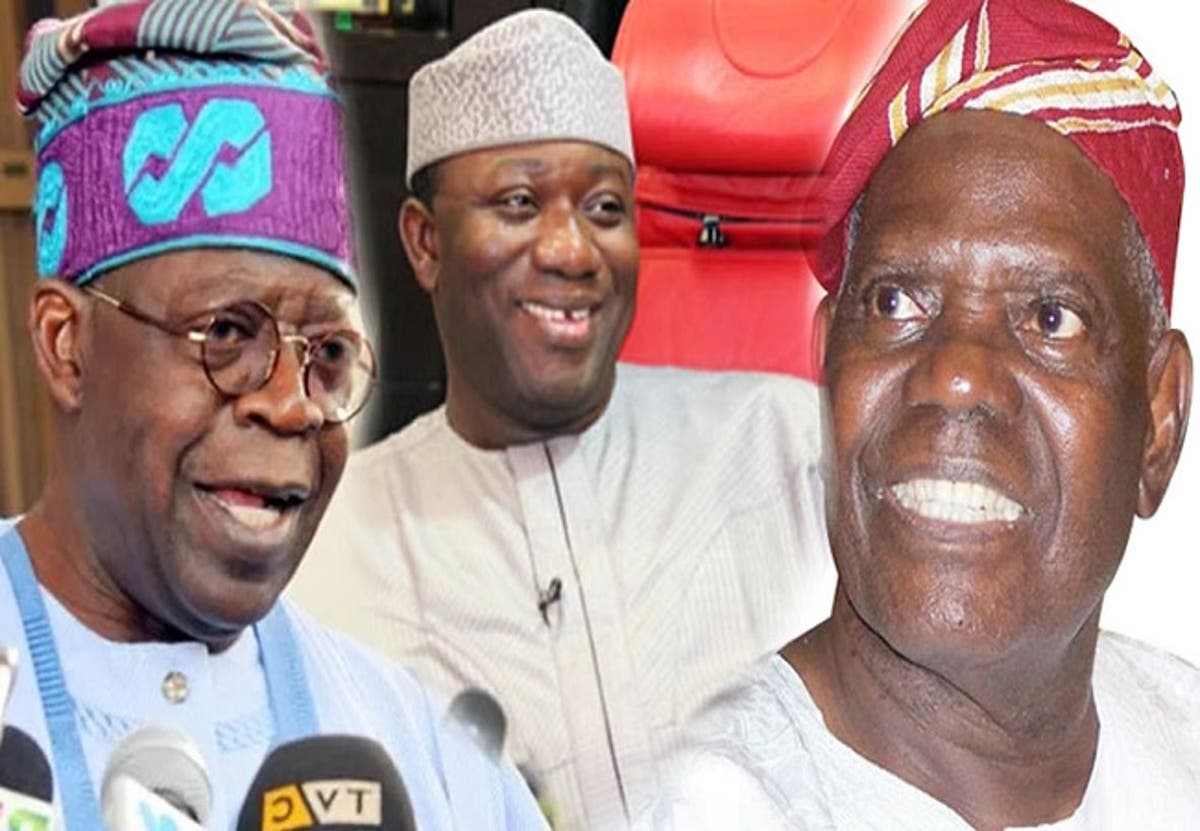 National Leader of the All Progressives Congress (APC), Bola Ahmed Tinubu, the party’s pioneer chairman, Chief Bisi Akande, and the Chairman, Nigeria Governors’ Forum, Dr. Kayode Fayemi, have been warned that they would be blamed if Southwest fails to clinch the presidential ticket of the party in 2023.

The Afenifere Renewal Group (ARG) gave the warning on Saturday while addressing journalists in Ado Ekiti, the capital of Ekiti State.

The ARG’s warning has since drawn reactions from individuals and groups.
To prevent the loss of the presidential ticket, the ARG has also advised Tinubu, Fayemi and Akande to unite Southwest.

The ARG’s Publicity Secretary in Ekiti State, Prince Michael Ogungbemi, who spoke on behalf of the group, said the Southwest had the prospect of producing the President after President Muhammadu Buhari’s two terms in office.

He said, “About 2023, ARG had met and we have concluded that the Yoruba nation is ready to lead Nigeria. We have a blueprint that we can present to any presidential candidate that can bring better democratic governance to all Nigerians.

“The South-West is ready to take over. We have human and material resources.

The political leaders must go on consultations. We have six geopolitical zones, Southwest is just a block. Tinubu must lead this block. Also, luckily, Dr. Kayode Fayemi, who is the NGF chairman, is from the Southwest.

“They must move for a united family to clamour for presidency for the South-West and produce a unified front. If they can speak with one voice, we will actually clinch this ticket, because it is our turn.”

He added, “We can’t go into that race with a divided house. Tinubu, Fayemi, Akande, Chief Reuben Fasoranti, Gen. Alani Akinrinade, Prof Banji Akintoye, Senator Femi Okurounmu, Senator Ayo Fasanmi, Chief Afe Babalola (SAN) and others must convene a meeting of progressive politicians in the zone so that we can be united. If we have a candidate that is acceptable to both the North and the South, we will surely win.

“But Yoruba nation will blame Tinubu, Fayemi and Akande, if the South-West fails to clinch the ticket,” he stated.

The ARG chief stressed the need for restructuring, saying it remained the panacea for peace and unity among diverse Nigerian citizens.

“Governance under presidential system is very powerful and costly, but with power residing in the states and local governments, things will be better. We must have a roundtable referendum to achieve this. It is not to satisfy certain groups, it will bring geometric progressive order, because we have not been moving at the right pace.”

The National Chairman of ARG, Mr. Wale Oshun, stressed the need for Southwest to pick the presidency in 2023, citing the non-constitutional arrangement that the leadership of Nigeria should be rotated.

He said, “The North will finish its eight-year tenure in 2023 and based on that, the presidency should return to South-West because former President Goodluck Jonathan is from the South-East block and he also spent six years, apparently eight if the one he spent along with the late President Umaru Yar’Adua is added.”

Some leaders in the region, however, expressed different opinions on the position of the ARG.

The Secretary-General, Yoruba Council of Elders (YCE), Dr. Kunle Olajide, agreed that the Yoruba should produce next President on the grounds that the ruling APC controlled five out of the six states in Southwest. He also agreed that if the party would produce a Yoruba presidential candidate, the leaders mentioned had critical and crucial roles to play.

He said it would be unfair to leave the fate of Yoruba presidency in the hands of Tinubu, Akande and Fayemi alone.

He, however, observed that with the political situation the country, “it is very difficult to say that APC would retain the presidency in 2023 looking at the enormity of crises within the party. It is only when the two major political parties APC and the Peoples Democratic Party (PDP) decide to field a southern candidate that the south could produce the President.”

A chieftain of Afenifere, Senator Femi Okurounmu, however, said the Yoruba race was not interested in the presidency until Nigeria was appropriately restructured to reflect true federalism.

He said, “Nigeria cannot continue the way it is without restructure.”

Efforts to reach Tinubu for his reaction failed. His spokesman, Tunde Rahman, did not pick his calls.

In a similar manner, Osoba refused to comment on the matter.

Senior Special Assistant to Fayemi on Public Communication, Mr. Segun Dipe, said power would not be served ala carte.

“You don’t just sit down and covet it. We must earn it. The South-South and Southeast also want the power. They all want power to come to them; but at the end of the day, the best person will emerge. Yes, we want it in Southwest, but we can’t legislate it. These leaders are national figures; they can’t just be pushing for the Southwest; that will be selfish. There is more to power than just sitting down and imagining it.

“Power involves networking and bridge-building. Southwest cannot carry gun to get it; it is a game of number. For us to get it, other zones must be willing to concede it without coercion. So, for power to return to Southwest in 2023, others must see the need. Tunubu, Akande and Fayemi are taking the right steps in the right direction. They are our leaders and they are of good standing. However, the concern of the ARG must not be ignored. Nobody is working against the interest of the South-West. The right thing will be done at the right time.”

But the APC Southwest zonal Publicity Secretary, Mr. Dapo Karounwi, said Ogbungbemi must have made the comment based on the level of his understanding of political mechanism in the country.

He said, “There is nothing the South can do to have the presidency in 2023 under the present arrangements if the north did not willingly concede it. The issue has nothing to do with Fayemi, Tinubu, Akande or anybody. If the PDP eventually gives its presidential ticket to a northerner, be assured that the APC will do same, and the 2015 presidential election scenario will replay in Nigeria.”

Meanwhile, a former president of Aka Ikenga, an association of Igbo professionals, Chief Goddy Uwazurike, has said the only zone in the South that has not produced a president was the Southeast.

He said, “The Igbo have paid the price and they are qualified in every aspect of human endeavour to rule Nigeria. If equity, justice and fairness must be adhered to, an Igbo man should be elected as president in 2023.”