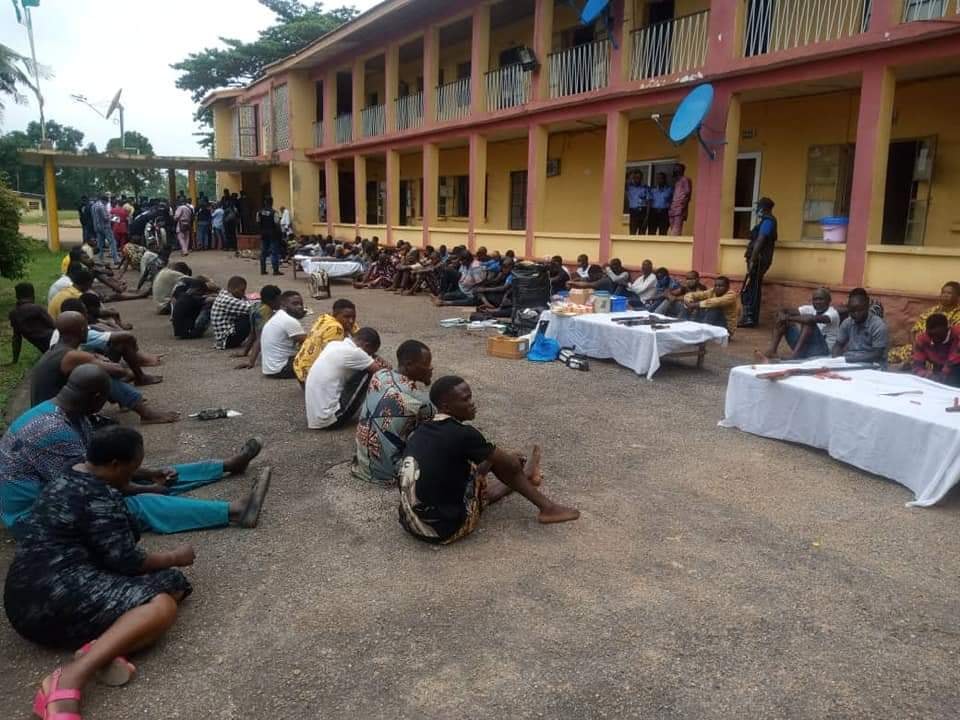 suspected cultists that the police arrested on July 7, 2020 allegedly in connection with the cultists’ annual 7/7 ritual that the suspects were said to be celebrating in different parts of the state.

The Command had on Sunday hinted of an alleged plan by members of a deadly cult group to launch a state-wide campaign of terror and violence in the state to celebrate their “7/7 ritual”.

The alleged attacks, the police said, were being planned by the cultists for Tuesday “to commemorate their strange calendar day, christened 7/7, where new members would be initiated into the fold.”

The Ogun State Commissioner of Police, Kenneth Ebrimson, who paraded the suspects yesterday at the State Headquarters, Eleweran, Abeokuta, said the arrest was the product of the Command’s fight against crime and criminality in the state.

Ebrimson said his men arrested the 103 suspects in different parts of the state between June and July.

Among the other suspects were a pastor, Oyebola Oluwafemi, who allegedly raped his 21-year-old daughter for about five years; a fake lawyer, Elijah Ojo, and a fake pharmaceutical drugs manufacturer, Moses Nwachukwu.

Ebrimson was particularly worried that Nwachukwu was “a fake manufacturer of a body pain drug that had caused damage to a lot of peoples’ health.”

He stated that Nwachukwu, who allegedly made use of his apartment as his manufacturing company, was arrested at No. 15, Akinbiyi Ojo Crescent, Ota, on June 28, 2020.

The police boss noted that many packs of the Dizpam tablets, Vitamin C tablets, a powder for the manufacturing of tablets, a sealing machine, empty packets of Dizpam and one Acer laptop were recovered from him.

Nwachukwu told journalists he was not the producer of the fake drugs but a sales representative for the company that produced them.

He said he had been selling the fake drugs since 2019.

“I am a sales representative. I have already given my credentials to the police. This is an external business that I do on my own. I am not the one producing them. I usually buy them from a company in Ewekoro. I started the business towards March ending last year,” he said.