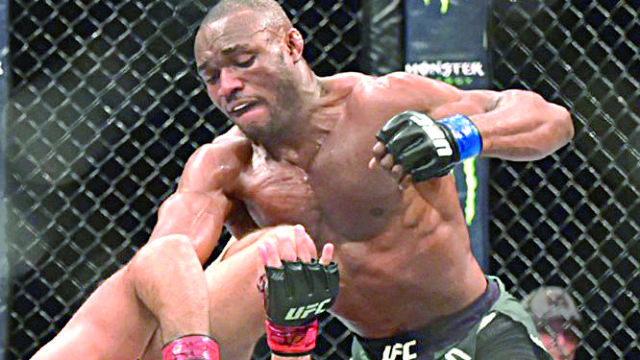 The UFC 251 battle, which holds on Fight Island, Abu Dhabi, is a fight many fans across the world have been waiting to see.

Kamaru Usman, popularly known as ‘The Nigerian Nightmare’ is sad his father won’t be at the cage side to watch him. “It would have meant a lot if he was there with me.”

His father, Muhammed, was released from prison in Texas in February after serving a 180-month sentence for health care fraud, according to ESPN.

The fight will hold in an empty arena in Abu Dhabi and Adesanya, who is also preparing to defend his middleweight title later this year, said in a brief message to The Guardian yesterday that Kamaru Usman has all it takes to be victorious in today’s UFC 251 battle.

“We wish Kamaru the best of luck. Naija no dey carry last,” the message from Adesanya’s camp stated.

‘The Nigerian Nightmare’ vowed yesterday he would ‘break’ Jorge Masvidal ‘internally’ when they clash tonight, but he wished his father will be at the cage side.

The father had been watching his son in the Octagon on basic cable in jail.

Usman was hoping that this summer he would be there in person, admitting: ‘Pre-COVID-19 pandemic, this was the culmination of everything I’ve done.

“This was the moment my father was able to be cage-side to watch his son who had worked to be at the centre stage of the world.

“It’s good that he’s able to watch it at home live on pay-per-view, but it would have meant a lot if he was there with me,’ he said at the UFC virtual media day on Thursday.

Usman is defending his title against late-replacement Jorge Masvidal, and he insists he wants to ‘hear each shot land’ in the absence of getting overhyped by the crowd.

He continued: “There’s a different fight that you fight with yourself that … sometimes can get lost in a stadium of 20,000 people. It can uplift you or be a detriment.

“But now you’ve got a guy beating your ass and talking to you, letting him know his dominance over you. It’s another level of breaking someone mentally.

“When you beat their ass from start to finish, it breaks them internally and takes something away that they can never get back,’ said Usman, whose original opponent Gilbert Burns withdrew last week after testing positive for coronavirus.