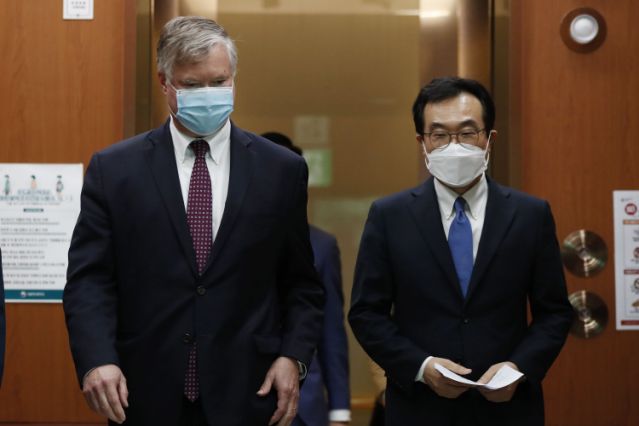 The United States is ready to resume stalled nuclear negotiations with North Korea, Washington’s envoy to Pyongyang said on Wednesday, rejecting reports he was seeking to meet North Korean officials during his ongoing visit to South Korea.

Stephen Biegun’s comments came amid speculation that his four-day visit could be a last-ditch effort to revive the North Korea talks ahead of the US presidential election in November, but he played down expectations for any new meetings.

“Let me absolutely be clear, we did not request a visit,” Biegun told reporters after meeting South Korea’s chief nuclear negotiator, Lee Do-hoon. “This visit this week is to meet with our close friends and allies, the South Koreans.”

But Biegun – who is US President Donald Trump’s point man for North Korea – said he was ready to resume talks at any time the North Koreans designate.

“We look forward to continuing our work for a peaceful outcome of the Korean Peninsula, I believe this is very much possible,” he said, noting Trump had given his full support.

Talks over Pyongyang’s nuclear arsenal have been stalled since a Hanoi summit between Trump and North Korean leader Kim Jong Un collapsed in early 2019 over what the North would be willing to give up in exchange for sanctions relief. Subsequent working-level negotiations have also fallen apart.

Kim declared an end to moratoriums on nuclear and ballistic missile tests in December, and North Korea has repeatedly said it has no intention to continue talks unless Washington drops what it describes as “hostile” policies towards Pyongyang.

North Korea has also been increasing pressure on the South, cutting off virtually all cooperation and blowing up a joint liaison office in its territory last month. The move followed months of frustration over Seoul’s unwillingness to defy US-led sanctions and restart joint economic projects that would help the North’s struggling economy.

Trump said on Tuesday he was open to another meeting with Kim and thought it might be helpful, Voice of America reported, citing a transcript of an interview Trump gave to Gray Television, due to be aired on Sunday.

Kim has been maintaining a low profile in recent months, making far fewer public appearances than usual, according to analysts who monitor his movements.

On Wednesday, North Korean state media reported Kim had marked the anniversary of the death of his grandfather, North Korea’s founding leader Kim Il Sung, by visiting his mausoleum at Pyongyang’s Kumsusan Palace of the Sun.

North Korea’s strident rejection of new talks means Biegun’s visit is more likely to focus on coordination between the two allies, rather than seizing some opening for diplomacy, said John Delury, a North Korea expert at Yonsei University in Seoul.

“I don’t see signals from North Korea that they are looking for engagement,” he told Reuters news agency.

“The allies should get on the same page about upcoming defence drills, how their working group can support inter-Korean projects while enforcing existing sanctions, and how to jointly respond if Pyongyang escalates or tests more weapons,” she told Reuters.