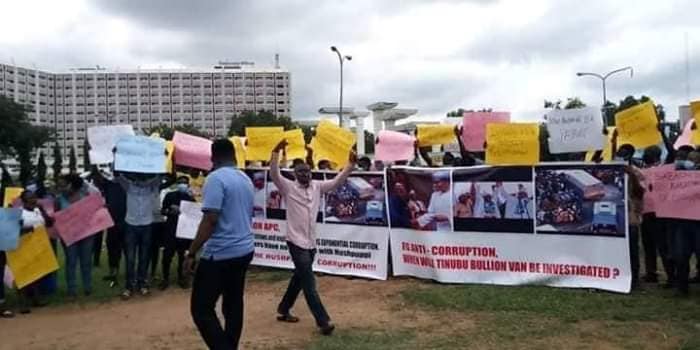 Nigeria has it that some angry Nigerians have stormed Area 11 opposite Nicon Luxury Abuja to demand for the arrest of the All Progressives Congress national leader and chieftain, Bola Ahmed Tinubu over lingering 2019 Presidential election Bullion Van Saga.

The protesters also called for the interrogation of the Nigerian President , Muhammadu Buhari over some funds allegedly missing from the coffers of the Nigerian National Petroleum Corporation.

Recall that according reports on a Premium Times publication of November 1st 2019, some pressure group had pressured the erstwhile EFCC acting chairman, Magu to investigate Bola Tinubu over cash-carrying bullion vans seen at his home on the eve of this year’s presidential election.

On February 22 2019, photos and videos had emerged on social media of two bullion vans entering Mr Tinubu’s property in Lagos.

It was alleged that Tinubu had received the monies in order to use them to manipulate elections in Lagos state. Mr Tinubu’s action was widely deemed as violating Nigeria’s anti-money laundering laws, but Tinubu later admitted the bullion vans were conveying money to his house, but defended his action, saying he did nothing wrong because he was not a government official.