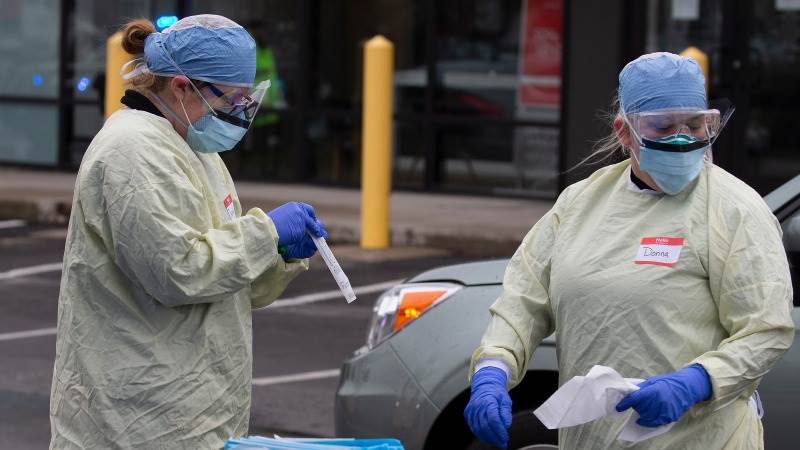 The new record was the latest proof that the coronavirus pandemic, once thought to be waning, was again spreading rapidly in the world’s biggest economy.

Florida, among the states hardest hit by the June surge, reported more than 10,000 new coronavirus infections, its largest spike so far.

The state’s new daily cases are more than any European country had at the height of their outbreaks.

California, another epicentre, saw positive tests climb 37% with hospitalisations up 56% over the past two weeks.

Texas Governor Greg Abbott, a Republican who has previously resisted calls to make face masks mandatory, on Thursday ordered them to be worn in all counties with over 20 coronavirus cases.

“In the past few weeks, there has been a swift and substantial spike in coronavirus cases,” Abbott said in a videotaped message.

“We need to refocus on slowing the spread. But this time, we want to do it without closing down Texas again.”

The wave of new cases has several governors halting or back-pedalling on plans to reopen their states after months of strict lockdowns, closing beaches and cancelling fireworks displays over the upcoming Independence Day weekend.

“We are not out of this crisis. We are still in the first wave of this crisis. It requires some level of personal responsibility,” California Governor Gavin Newsom, a Democrat, said at a daily briefing on the pandemic.

Earlier on Thursday, Kansas required face coverings after a 46% spike in infections there last week.

The sweeping business shut-downs earlier in the pandemic devastated the U.S. economy and threw millions of Americans out of work, leaving governors reluctant to take such draconian steps again, even if the lifting of restrictions likely touched off the new outbreak.

A U.S. Labor Department report out Thursday showed the re-openings had a dramatic impact on hiring, with the United States creating jobs at a record pace in June. However, employment remains 14.7 million jobs below pre-pandemic levels.