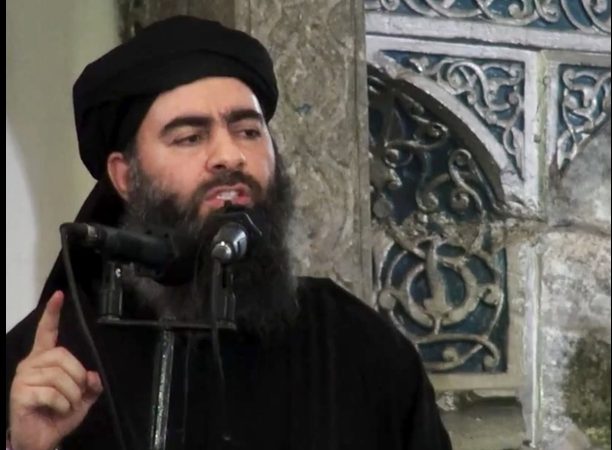 Almost nine months after the death of Islamic State (ISIS) leader Abu Bakr al-Baghdadi by U.S. Special Forces, it was rumored Tuesday morning that his successor — the shadowy Abu Ibrahim al-Quraishi — had also been taken out, this time in an American-led drone strike in the northern pocket of war-torn Syria at some point earlier this week.

According to Hassan Hassan, director of the Non-State Actors Program at the Center for Global Policy, the terrorist leader was traveling under a false name and identity — “Ahmed El Darwish” — in areas controlled by the Turkish-backed rebels.

While reports remain subject to speculation — and U.S. government officials have yet to confirm or deny the mounting murmurs — at the same time Tuesday morning, Secretary of State Mike Pompeo announced that the financial reward for information of the “new ISIS leader” had been increased from $5 million to $10 million.

While a far cry from the $25 million once offered for Baghdadi, the bounty bump is seemingly indicative of an increased push to squash the brutal insurgency, which has been slowly regaining a foothold in swaths of Iraq and Syria in recent months.

So who is al-Quraishi?

“Abu Ibrahim al-Hashimi al-Quraishi was a former officer in Saddam Hussein’s army and was considered one of the most prominent ISIS members in Baghdadi’s circle,” David Ibsen, executive director of the Counter Extremism Project (CEP), told Fox News. “After the U.S.-led occupation of Iraq and the capture of Hussein in 2003, Quraishi eventually became a general Sharia jurist for al-Qaeda.”

The al-Quraishi name given to him by ISIS implies that he descended from the Prophet Muhammad’s Quraysh tribe, which is typically considered a coveted prerequisite for becoming caliph.

Born into an Iraqi Turkman family in the once ISIS-controlled town of Tel Afar, he is one of the few non-Arabs to have ascended into a high-profile position — driven not only by his lineage but by his background as an Islamic scholar, having earned a degree in sharia law from the University of Mosul.

Quraishi, who is estimated to be in his late 30s, was — like Baghdadi — held by U.S. forces in the notorious Camp Bucca prison in southern Iraq, which is where he and the slain ISIS leader first met and bonded.

Additionally known by the nom de guerre Hajji Abdallah, he was believed to have initially risen through the ranks as an Al Qaeda leader in Iraq and then became an ISIS deputy leader when the outfit splintered away. In 2014, Quraishi pledged allegiance to Baghdadi and rose to become one of his top lieutenants.

“Quraishi was one of the most respected of Baghdadi’s lieutenants. He continues to carry that respect, but he, of course, does not carry as much weight as Baghdadi, who founded the group and led its sweep throughout the Middle East, sparking the creation of ISIS provinces around the world and a propaganda machine that reaches as far as the shores of Australia and the cities of the United States,” Ibsen said. “While Quraishi is viewed as a more than capable replacement, he is unlikely to overshadow Baghdadi’s legacy.”

In March, Pompeo announced that al-Quraishi would be slapped with the “specially designated global terrorist” label — a bid to further cut him off him from financial resources and any other formal dealings, some two months after U.S. intelligence revealed that al-Quraishi’s true identity was Muhammad Sa’id Abdal-Rahman al-Mawla, also depicted as Muhammad Sa’id Abdal-Rahman al-Mawla al-Salwi.

He was appointed to the top spot in the days immediately following Baghdadi’s death in October 2019, having been delegated the likely heritor by the group’s shura council just over two months before the deadly raid. Even before ISIS took to its telegram channel to announce his role in the aftermath of Baghdadi’s death, the U.S. government had already deemed Quraishi a wanted man with a $5 million premium — but at the time, little was known about his credentials and clout.

Since then, the U.S. government has determined that al-Quraishi “helped drive and justify the abduction, slaughter, and trafficking of the Yazidi religious minority in northwest Iraq,” of which many thousands of girls and women were forced into sexual slavery and hundreds upon hundreds of men brainwashed into the fighting fold or simply slaughtered for their faith. Several military and intelligence sources further told Fox News that not only did Quraishi aid such genocide, but he was primarily responsible for crafting and “legalizing” the plan to decimate the Yazidi population.

“This reward is an important moment in our fight against ISIS and its branches and networks around the world. As ISIS is defeated on the battlefield, we are determined to identify and find the group’s leaders so that the global coalition of nations fighting to defeat ISIS can continue to destroy ISIS remnants and thwart its global ambitions,” the Rewards for Justice program stated.

But whether or not the targeting of terrorist leadership has any real value in depleting an organization is subject to debate.

“Unlike open-ended occupations, targeted approaches can be effective at eliminating anti-U.S. terror threats. While it may seem meaningful that there is a top leader the administration wants to take out, the reality is these kinds of operations almost never lead to strategic outcomes,” Defense Priorities Senior Fellow Lt. Col. Daniel L. Davis said.

But from the lens of Bill Roggio — senior fellow at the Foundation for the Defense of Democracies (FDD) and editor of FDD’s Long War Journal — the U.S. too often makes the fatal flaw of not going after the top tier fast and hard enough.

“Quraishi was a longtime, founding member of ISIS — considered to be both a military commander and someone with religious credibility,” he said. “It’s important we go after the leadership, but he is someone who has been waiting a long time. We don’t go after them hard enough.”

In terms of the new leader’s governing style, Mansour Al-Hadj, a senior researcher with the MEMR Jihad and Terrorism Threat Monitor (JTTM), observed that the new caliph seems to be focusing on two goals: carrying out more attacks and stressing his group’s legitimacy by accusing other jihadi groups of deviating from the path of jihad and allying with apostate governments.

“Under his leadership, the group has intensified its attacks in Iraq and expanded its operations in West and Central Africa. The group has focused on carrying out multiple and small scale attacks aimed at exhausting its enemies,” Hadj said. “ISIS has adopted a more aggressive stance against Al Qaeda and particularly its branches in Yemen and West Africa under his leadership and accused them of deviating from the path of jihad, refusing to implement sharia and allying with the local governments.”

And the uptick in Quraishi’s value announced this week, Ibsen pointed out, is indicative of the continued significance and threat of ISIS.

“Despite losing its physical caliphate, ISIS remains a dangerous threat, not just to the region but to the West as well. ISIS has shifted its strategy from acquiring and holding territory to that of a more traditional insurgency. We have seen this shift played out in ISIS’s propaganda for the past few years as its territorial hold shrank,” Ibsen continued. “Instead of calling for foreign fighters to come to Iraq and Syria to live in the caliphate, ISIS now calls on followers to carry out attacks in their home countries. ISIS wants to show the weakness of the modern state system and how these governments — and the Iraqi government specifically — cannot protect their people. ISIS is now melding the strategies of other Islamist groups, chiefly Al Qaeda and the Muslim Brotherhood.”

Indeed, concerns are growing in Iraq and Syria with regards to an ISIS resurgence — especially as the group, believed to still have several thousand soldiers in its rank and file, has capitalized on the distraction and economic hardship brought on by the coronavirus pandemic. Iraq-based intelligence sources also told Fox News that weapons caches belonging to ISIS operatives are found on a regular basis and that the group has managed to cower in place in underground tunnels that were for years safe havens in enabling fighters to evade detection.

On Tuesday, Operation Inherent Resolve (OIR) — the mission name issued by the U.S-led coalition to defeat ISIS in the region — confirmed in its monthly report that in the month of April, the task force had conducted seven strikes consisting of 16 engagements in Iraq and Syria.

“Taking out Quraishi will not stop ISIS. Fighting that ideology is the only way to defeat ISIS. That said, removing the leaders of these groups does create short-term disruptions as they then focus on figuring out who to put in charge next,” Ibsen added. “With luck, there will be infighting and power struggles that will further divide the group and perhaps cause rifts between senior leaders arguing over the future direction of the organization. Further, eliminating the head of any group always causes a psychological impact. It shows vulnerability and doubts over the group’s immediate future.”