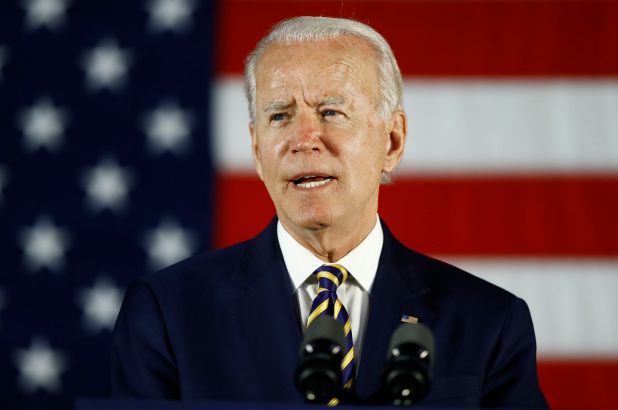 Joe Biden will accept the Democratic presidential nomination in person at the party’s national convention in August, but it will be a largely virtual gathering due to coronavirus concerns, organizers announced Wednesday.
“Vice President Biden intends to proudly accept his party’s nomination in Milwaukee and take the next step forward towards making Donald Trump a one-term president,” Biden’s campaign manager Jen O’Malley Dillon said in a statement distributed by the party.

The convention is set for August 17 to 20 in Milwaukee, Wisconsin, a battleground state that Trump won in 2016 but which Democrats are seeking to reclaim in November.

Earlier this month Biden, 77, clinched the Democratic nomination after former rivals including Senator Bernie Sanders and Senator Elizabeth Warren dropped out and endorsed him.

Following consultations with public health officials, convention organizers have determined that “state delegations should not plan to travel to Milwaukee and should plan to conduct their official convention business remotely.”

“Unlike this president, Joe Biden and Democrats are committed to protecting the health and safety of the American people.”

Organizers said a process was being developed that ensures all delegates can cast their votes remotely during the convention.

To minimize risks to public health, several in-person convention parties and gatherings will be scrapped, and Democrats are rolling out new ways to organize and engage with voters online.

Biden has largely remained off the campaign trail and in his Delaware home since mid-March due to the pandemic, although he has begun participating in small-scale events. He meets with families in Pennsylvania on Thursday to discuss health care.

Trump has been returning to hosting large, live rallies over the past week, even in states where virus cases have spiked.

Republicans had scheduled their convention for North Carolina. But when the state’s governor refused to guarantee that a large, in-person rally could be held amid the pandemic, Trump switched the location of main events including his acceptance speech to Jacksonville, Florida.

Florida is currently in the grips of a coronavirus surge, and on Tuesday it recorded 5,508 new cases, with Governor Ron DeSantis warning of “a real explosion” in new cases, particularly among younger people.