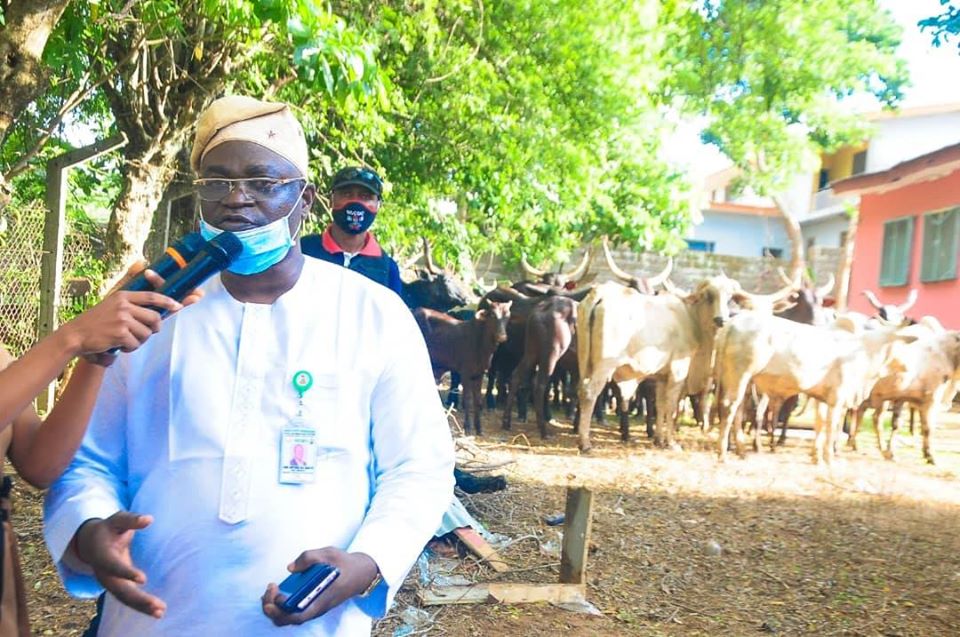 State Commander, Amotekun Corps, Adetunji Adeleye, made this known while conducting journalists round the affected farmlands.

Mr. Adeleye explained that the cows were arrested after series of complaints by owners of the farmlands in the area.

According to him, more than eight separate farmlands with crops such as maize and cassava were completely destroyed by herdsmen who usually grazed their cows around the affected area

The commander said the herders, who were heavily armed, chased away the farm owners who later contacted the corps.

“On seeing the owners of the affected farmlands, the heavily armed herders attempted to kill them but the farmers ran to protect themselves.

“When the joint security network, which includes the Agro-Rangers of the NSCDC, got to the scene, the herders again attempted to attack them but the security operatives overpowered them.

“This led to the arrest of the cows while the herders took to their heels,” he said

Mr. Adeleye warned herdsmen against destroying properties, urging them to rear their cows in confined areas to avoid wanton destruction of farmlands.

He equally advised farmers not to resort to self-help anytime the cows destroyed their crops but to alert the corps for necessary actions.

The commander, who decried the level of destruction on the farmlands, said the owners of the cows would be prosecuted.

Olawale Aluko, a farmer, said the herders consistently grazed their cows “on our farmlands”, while complaints made to security agencies in the past did not yield any result.

He appealed to the corps commander to save farmers from the incessant attacks and harassment from herdsmen, pointing out that the herders were “destroying our means of livelihood”