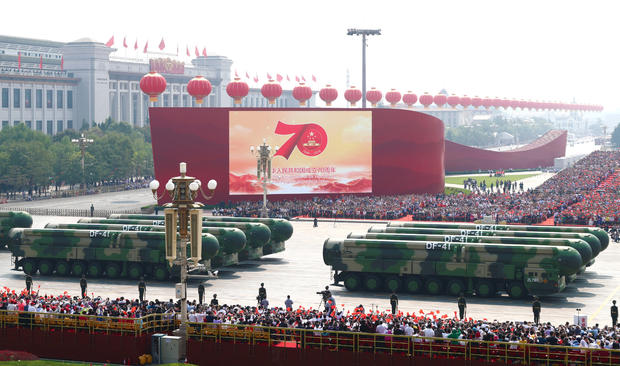 U.S. arms control talks with Russia, and perhaps China, are slated for Monday, June 22 in Vienna, just days after Secretary of State Mike Pompeo flew to Honolulu to meet with China’s top diplomat Yang Jiechi at Hickam Air Force Base. The talks are aimed at bringing China into broader negotiations with Russia to limit all three countries’ nuclear weapons stockpiles.

Concerns are mounting about Russian and Chinese interest in developing their nuclear arsenals. The talks come two months after a State Department report raised questions about their compliance with arms control, non-proliferation and disarmament agreements and commitments.

“China’s overall nuclear stockpile is going to double over the next 10 years. That of course is a great concern,” U.S. arms control negotiator Ambassador Robert A. Wood told CBS News.

Wood is the U.S. Permanent Representative to the Conference on Disarmament, and serves as U.S. Commissioner for the New START Treaty’s Bilateral Consultative Commission. He has been a U.S. Foreign Service officer and worked with other agencies of the government for 32 years, serving both Republican and Democratic administrations. Along with Marshall Billingslea, who took up his post last month as President Trump’s senior envoy on arms control, Wood said the arms control team is “laser focused” on bringing both Russia and China into a new framework agreement.

“We’re not going to allow Russia and China to continue to move forward on their modernizations and increasing the stockpiles of nuclear weapons,” Wood said in the interview. “This is something that the president said cannot continue. And so, right now, we are modernizing our stockpile. But we are not increasing the number in any substantial way. And we are having to deal with and respond to these growing challenges from Russia and China. And we cannot turn a blind eye to this.”

Ambassador Robert Wood: With regard to China, let me just put in a little bit of historical context. In the last 10 years, the U.S. has been trying to reduce the role of nuclear weapons in its overall national security strategy. China and Russia have gone in the opposite direction. China has been modernizing its strategic nuclear forces. It’s also modernizing its non-strategic nuclear weapons that pose a very serious security concern to U.S. forces in the Indo-Pacific region as well as some of our allies, and China is the least transparent of all the P5 countries [the five permanent members of the U.N. Security Council: U.S., U.K., France, Russia, China]. So there’s some real concerns here about China’s buildup and we don’t really have a great sense of what that exact buildup looks like, except that we do know that China has been developing mobile ICBMs [intercontinental ballistic missiles]. They’re assumed to have a nuclear triad [nuclear weapons delivery capacity from land, submarine and aircraft].

As I said, I think the biggest problem we have is lack of transparency coming from China, and we have discussed with China on numerous occasions, the need for all nuclear weapon states to meet their NPT [Non-Proliferation Treaty] commitments to make a good faith effort to negotiate on nuclear disarmament. So that is why we have been calling for China to come to the table with the United States and Russia, so that we can start to address some of these issues that we have great concern about. …

We think it’s imperative that China comes to the table, and there will be a seat there in Vienna for them. We hope they will show up.

When we spoke earlier you talked about a doubling by China of some of this capacity. Could you explain that?

It’s expected that, at a minimum, China’s overall nuclear stockpile is going to increase over the next 10 — double over the next 10 years. That of course is of great concern to not just the United States but another, a lot of other countries and it, as I said earlier, they are, in essence, growing their ballistic missile submarine fleet. They are developing road-mobile ICBMs. They are engaged in developing hypersonic weapons.

And as I said, China has been free from any kind of constraints on them with regard to arms control, because the treaties the U.S. and Russia have agreed on in the past [do] not included China. So we think it is long overdue for China to come to the table, and that’s an imperative, that is a priority for this administration and we’re going to continue to push until China does take the responsible position and come to the table, so that we can have negotiations on these weapons of concern.

Is there an implication that the U.S. will also engage in modernization of its nuclear weapons, if Russia and China don’t fall into line?

We’re not going to allow Russia and China to continue to move forward on their modernizations and increasing the stockpiles of nuclear weapons, and this is something that the president said cannot continue. And so, right now, we are modernizing our stockpile. But we are not increasing the number in any substantial way, and we are having to deal with and respond to these growing challenges from Russia and China. And we cannot turn a blind eye to this. …

We have to deal with the world as it is, and not as we would like it to be. And so, with Russia and China moving in this different trajectory than we have been moving, we have to do what’s in our national interest and not only in our interest but in the interest of our allies and partners.