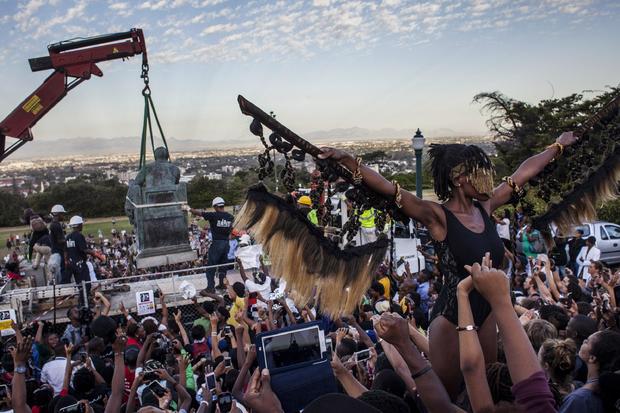 Johannesburg — There have been so many attempts to deface the statue of Paul Kruger in South Africa’s capital city of Pretoria that it’s been fenced off. “Killer” has been sprayed on its base and, recently, someone tried to scrawl “We can’t breathe” across it.

Ironically, Kruger fought one oppressive regime, British colonialism, only to usher in another in the form of a white racist government. The fury being leveled at symbols of oppression around the world is not new on this continent.

Students at South Africa’s University of Cape Town celebrated when the statue of Cecil John Rhodes met an ignominious end five years ago. A crane was brought in to remove the statue from its base. It now lies abandoned, covered by a tarp at a local army base.

Cape Town students had long demanded the removal, insisting it was offensive to glorify a racist colonizer. Constitutional lawyer Lwando Xaso believes it was a cathartic moment for the whole country when the statue finally came down.

“I think statues represent so many ideas that are wrapped up in the physical object itself, and that by toppling them, you are saying that those ideas that they represent no longer have a place in society,” she said.

South Africa isn’t the only African nation that has sought to wipe out a shameful past by removing hated symbols of bygone eras.

Another statue of Rhodes was toppled in Zimbabwe in 1980 after that country became independent. Before independence, the country itself was named after the white British colonizer: What had been Rhodesia became Zimbabe.

In Kenya, a statue of Britain’s Queen Victoria was knocked down and left headless five years ago, and decades ago a statue of colonial ruler King Leopold II of Belgium was pulled down in the Congo after its independence in 1960.

But for many, including Xaso, removing monuments doesn’t go far enough.

“I’m a proponent for taking down statues if it leads to some kind of material change, if the conditions of people’s lives, socioeconomic rights, are fulfilled. Otherwise, to me, it’s meaningless,” she told CBS News.

“We haven’t, in Africa, thought seriously about the ways in which we want to reconstruct our public sphere in the aftermath of colonial oppression,” he said. “We have hardly started that discussion.”

In Cape Town, the dismantling of the Rhodes statue morphed into a far bigger campaign known as the Fees Must Fall movement, which sparked protests across South Africa.

Students wanted college to be free and accessible to all, and demanded the curriculum be decolonized.

“The debate over statues is always a debate about more than statues,” Mbembe told CBS News. “The transformation of the curriculum so that it reflects who we are, where we come from, where we are struggling and where we want to go. In the case of the ongoing debates in the U.S., in the U.K. and Germany, in France and elsewhere the key issues are, of course, those of racial justice.”

Re-examining historical injustice can result in its symbols being replaced with something new. It’s an opportunity to re-imagine what kind of values a society upholds, suggested Xaso.

“I think for me, if I took the Cecil John Rhodes statue, I’d want to melt some parts of it, create an interesting feature out of it,” she said, “something that tells a bigger story than just of Cecil John Rhodes, but maybe tells the story of what Rhodes represents.”

Mbembe said Africans — and people around the world — need to “decolonize our minds” and ask how we can both overcome systemic racism and share the world in a way that makes it more sustainable for all.

“They come together neatly in the context of the murder of George Floyd and the coronavirus, which attacks a respiratory system. Have you in mind the last words of many of those victims? ‘I can’t breathe.’ So how do we make a world where we all have a universal right to breathe?”

That, Mbembe said, “is the key issue that is at stake in the current debate on statues.”

In Pretoria, Paul Kruger’s statue may well disappear in the future, but the wounds of racism and colonialism run deep. That’s why so many in this country say not only should statues be toppled and new more inclusive symbols built, but reconstruction must also include real socioeconomic change.