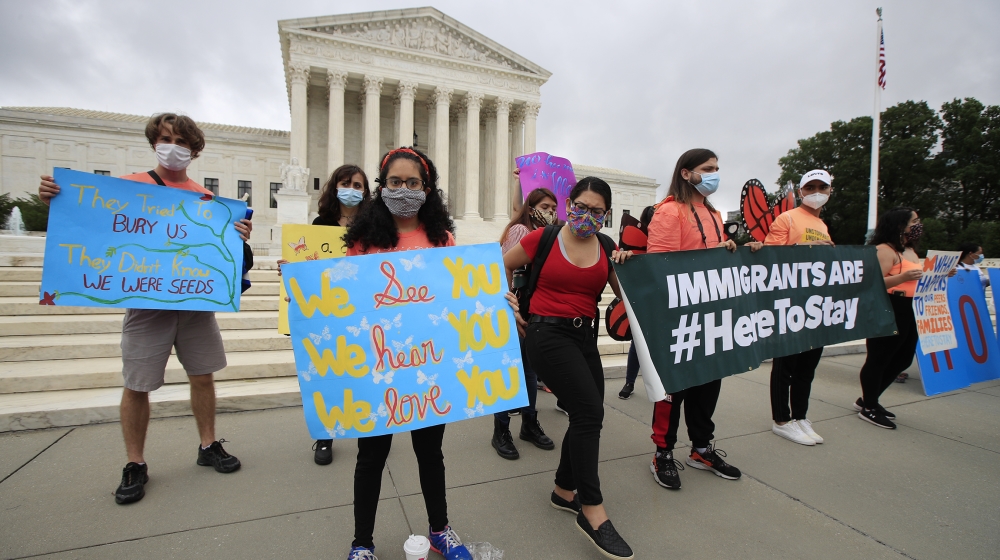 The US Supreme Court dealt US President Donald Trump a major setback on his hardline immigration policies, ruling against his bid to end a programme that protects from deportation 650,000 immigrants, dubbed “Dreamers”, who entered the United States as children without documentation.

The justices on Thursday upheld lower court rulings that found Trump’s 2017 move to rescind the Deferred Action for Childhood Arrivals (DACA) programme, created in 2012 by his Democratic predecessor Barack Obama, was unlawful.

“The Supreme Court is on the right side of justice and history and it’s been a really long, torturous couple of months,” said Joella Roberts, who was four-years old when she came to the US with her mom and brother in 2001 from Trinidad and Tobago.

Sumbul Siddiqui, 27, came to the US with her Pakistani parents and is a second-year medical student at Loyola University Chicago Stritch School of Medicine.

After learning about the Supreme Court ruling, Siddiqui began crying, saying she can now plan to finish her medical training.

“I’ve had so much anxiety and it feels like something has lifted off my shoulders,” she said. “We are finally feeling some relief.”

Those who receive relief through the plan are typically called “Dreamers” by advocates and commentators alike, after the US Congressional DREAM (Development, Relief, and Education for Alien Minors) Act legislation that took up their cause.

The US Department of Homeland Security (DHS) moved to end the programme in September 2017.

In its decision, the court wrote the “dispute before the Court is not whether DHS may rescind DACA. All parties agree that it may. The dispute is instead primarily about the procedure the agency followed in doing so.”

However, the court concluded the “total rescission” of DACA “was arbitrary and capricious”.

For now, Dreamer immigrants retain their protection from deportation and their authorisation to work in the US.

When Trump’s administration moved to end the act, protests were organised against the move across the country with Dreamers and advocates calling for new legislation that would provide a path to citizenship.

The programme grants deportation relief and work permits – but not a path to citizenship – to 649,000 immigrants brought to the US as children without documentation.

Trump lashed out at the Supreme Court decision and another on Monday that extended federal employment protections to gay and transgender workers under the 1964 Civil Rights Act.

He called the decisions “horrible and politically charged” and tweeted, “Do you get the impression that the Supreme Court doesn’t like me?”

Democrat Senator Chuck Schumer, speaking at the US Capitol on Thursday, called the decision “surprising and welcome”.

“Let me say this – in these very difficult times the Supreme Court provided a bright ray of sunshine this week, with the decision on Monday … and now with this decision,” Schumer said.

The Supreme Court outcome seems certain to elevate the issue in Trump’s re-election campaign, given the anti-immigrant rhetoric of his first presidential run in 2016 and immigration restrictions his administration has imposed since then.

“Immigration is a unifying issue for Latinos,” Biden campaign senior adviser Cristobal Alex said. “It doesn’t matter if you’re Puerto Rican, if you’re born a citizen, you understand that attacks on Latinos based on immigration [are] really an attack on all Latinos.”

The firm’s polling suggests immigrant rights ranking among the top issues for Hispanic voters, just behind the government’s response to the coronavirus pandemic, healthcare and economic matters.

Action by Trump to end DACA also could have helped convince undecided moderate, college-educated swing voters to choose Biden, even if they agree with Trump’s economic message, according to Democratic pollster Nick Gourevitch of the New York City-based Global Strategy Group.

“Generally speaking, voters are pretty sympathetic to Dreamers,” Gourevitch said, noting about 27,000 DACA enrollees are working in healthcare jobs during the pandemic.