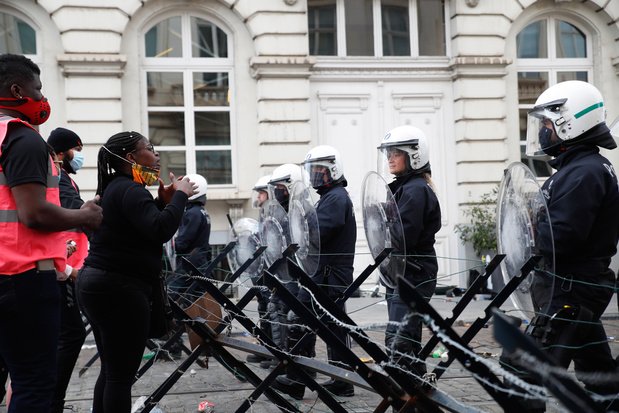 Members of the federal police force will demonstrate today in an unofficial protest against accusations of systemic racism.

The protests will be organised at locations across the country, and rather than marches will include smaller actions such as throwing handcuffs to the ground and sounding vehicle sirens.

The protest has been organised by members of a private Facebook group called Police Unifying Movement, but is supported by at least one union representative. Mario Thys of the neutral union SNPS told Bruzz he had “1,000% understanding” for the action.

The unions will be meeting with the government today, but Thys said if those talks produce no result, he will consider joining the protest himself.

“Police-bashing is too simple, and short-sighted.”

The complaints against the police follow on from the Black Lives Matter protest in Brussels two weeks ago, when 10,000 people gathered peacefully to protest institutional racism after the killing in the US of George Floyd at the hands of police.

That protest was marred by clashes later between police and a group of protestors intent on vandalism and in some cases looting.

The police in particular are accused of systemic racism, including ethnic profiling and often violent confrontations with members of the public, in particular people of colour. Examples include the death of a teenager in a police chase after he was caught riding a scooter during lockdown, the severe beating of a Sudanese refugee for no reason other than that the officer – as he told a court – “saw red”.

More recently, this week a 71-year-old German member of the European Parliament, Pierrette Herzberger-Fofana, was manhandled and assaulted by police at Brussels North station. Ms Herzberger-Fofana is a black woman, born in Mali.

In the run-up to today’s protest, the federal and local police published an open letter calling for mutual respect and denying the existence of systemic racism within the force.

Racist incidents, the letter says, are subject to legal and disciplinary sanctions. But the fact that isolated incidents occur does not justify the conclusion that the force is racist through and through.

The police also promised to be open to the views of external organisations. “Any recommendations they may have also deserve our consideration, and invite a reasoned debate. After all, we are in favour of an open and respectful organisation, and we expect the same respect from our police colleagues.”