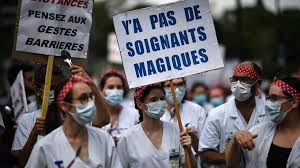 After logging three months through a public health crisis, doctors, nurses, and healthcare aides will hit the streets again across France on Tuesday to make sure the government’s recent pledges for hospitals stay close to mind.

Health workers are poised once again to put pressure on the French government as it conducts sweeping consultations, dubbed the “Ségur de la santé”, meant to set the stage for systemic healthcare reform.

In Paris, Metz, Montpellier and beyond, more than 220 rallies are slated to go ahead Tuesday during a day of national protest action called by several healthcare worker collectives and unions.

The objective is to parlay the public support on show during the worst of the novel coronavirus outbreak into tangible advances for hospital and nursing home employees, the cohort lauded as “heroes in white coats” by French President Emmanuel Macron at the start of the pandemic.

“The government’s soothing speeches, chocolate medals and promises of random and hypothetical bonuses will not suffice. What is needed going forward are real human and budgetary resources for public health,” the CGT union said in a communiqué.

In Paris, a demonstration is scheduled for 1pm on Tuesday afternoon in front of the health ministry and is set to bring together multiple union leaders, including the CGT’s Philippe Martinez and Yves Veyrier of Force Ouvrière. A march towards the lower-house National Assembly and the Invalides Monument will follow that rally.

Elsewhere, most protests will take place in front of hospitals and healthcare centres, for which the CFDT union has also filed notice for strike action. Home care workers and retiree associations have also said they would join the protests.

Healthcare workers, who have been on the frontline of France’s so-called war on Covid-19, are demanding a hiring scheme and a general salary review on the order of €300 to €400, according to unions. They are calling for “halting all facility, department and bed closures”.

“After 14 months of mobilisation and a healthcare crisis, going back to ‘abnormal’ is unthinkable. For the system’s users, it is no longer the time to applaud healthcare workers, but to support our demands,” insists the Inter-Hospital Collective spearheading the year-old movement for better pay and working conditions.

Tuesday’s day of protest is the climax of a series of demonstrations in favour of hospitals in recent weeks, including the so-called “Tuesdays of anger”. The protests coincide with the “Ségur de la santé” healthcare consultations that Prime Minister Édouard Philippe launched on May 25.

Those healthcare reform talks are supposed to result in concrete proposals by early July. But no figures, including specifics on any salary increases, have been laid on the table so far.

The process has been frustrating for unions, they say. “Union organisations cannot work amid constant improvisation and without allocated means,” lamented a number of medical groups, including the France’s Federation of Doctors (FMF), decrying a “sham”.

“The methodology of the Ségur de la santé poses problems,” said the Inter-Hospital Collective, expressing regret over a “lack of transparency”. The collective insists that, “Concrete answers need to be brought now.”

One union, Sud Santé, has already walked out on the discussions, denouncing a “vast public relations operation”. Others have not followed suit for the moment, but some organisations have floated the threat of doing so.

Over the weekend, the government issued decrees enacting the exceptional bonuses it had promised of €1,000 to €1,500 for nursing home employees and a 50 percent increase in pay for hospital overtime hours, slated to be paid out before September.

As for the salary increases pledged within the framework of the Ségur talks, the time will come soon, the health minister said. “Between now and early July, healthcare workers will have all of the answers to the questions they are asking and the demands they are legitimately making,” Véran said Monday.