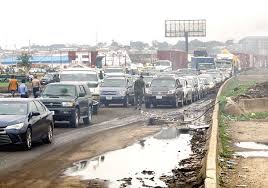 Security agents enforcing the curfew imposed by the government as a result of the coronavirus pandemic around the Kara end of the Lagos-Ibadan Expressway are exposing motorists and commuters plying the area to untold hardship, PUNCH Metro investigation reveals.

The Presidential Task Force on COVID-19 had recently directed that the nationwide curfew be enforced from 10pm to 4am instead of the previous 8pm to 6am.

To enforce the curfew, security agents have been using barricades to block both the inward and outward lanes of the expressway, thus making entry into and exit from Ogun and Lagos states difficult even in the daytime.

Vehicular movement usually becomes frustratingly problematic due to the enforcement of the curfew.

As of 10am on Wednesday, the gridlock had extended from the Kara end to the Magboro end of the expressway on the Lagos-bound lane.

When PUNCH Metro visited Kara on Thursday, it was observed that the barricades used in blocking the road to enforce the curfew were not completely removed from the road at daybreak, thus only a vehicle could pass through the narrow space left at a time.

A hawker, who identified herself simply as Yemi, said the barricades were responsible for the gridlock, adding that vehicles coming into Lagos had to slow down because the road had become narrow.

Yemi said, “The gridlock is caused by the barricades, because after the curfew has ended for the day, the security agents don’t usually remove all the barricades from the road.

“The barricades left on the road narrow the space left for vehicles to manoeuvre and this usually leads to gridlock that extends to Berger from Lagos and to Magboro from the Ogun State end of the road. I usually sell most of my goods in the gridloclk.”

Although the security agents said the barricades were left on the road during the daytime to ensure compliance with the use of face masks and ensure that vehicles were not conveying more passengers than the stipulated numbers in order to limit the spread of coronavirus, many motorists alleged that the security agents were taking advantage of the situation to extort them.

“If the security agents impound your vehicle for violating any of the directives, they will waste your time and if you are in haste to go somewhere, you will be forced to pay a bribe before they will release you,” Yemi said.

When contacted, the Ogun State Police Public Relations Officer, Abimbola Oyeyemi, said apart from enforcing the curfew, the policemen were also on the road to enforce the interstate travel ban, adding that the command would look into the gridlock caused by the barricades.

Oyeyemi stated, “There is still interstate lockdown and people should not be allowed to move in and out of the state. The state Commissioner of Police was on that road yesterday (Wednesday) to find out what the problem was and he discovered that there were some areas where the barricades were not necessary.

“He immediately ordered the removal of those barricades at Mowe and Ibafo, while those at Kara and Berger were left. We are going to look into what needs to be done around Kara to ease the gridlock in that area.”