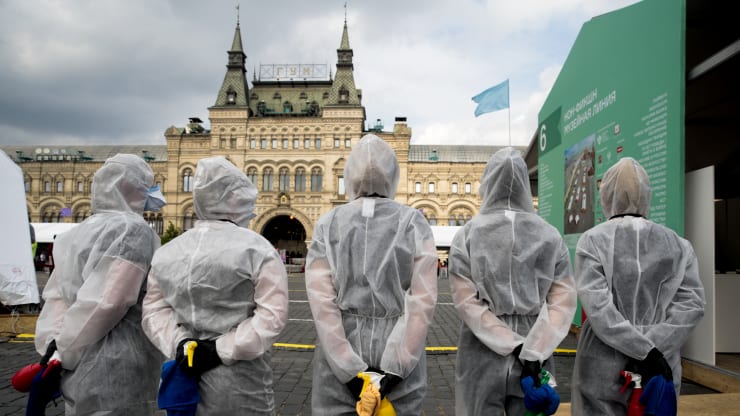 The number of confirmed coronavirus cases in Russia surpassed 500,000 on Thursday, and the rate of new daily cases remains high, but restrictions are being lifted quickly ahead of key political events.

Experts say Russia is keen to lift unpopular lockdown measures ahead of two important political milestones which were rescheduled because of the coronavirus pandemic: Moscow’s Victory Day Parade — Russia’s annual show of military hardware — and a historic referendum on constitutional changes that would allow President Vladimir Putin to run for further terms in office.

The Kremlin has insisted that the coronavirus crisis is under control and restrictions can be safely lifted.

Russia’s Covid-19 case tally hit 502,436 Thursday after a further 8,779 cases were reported. The country’s coronavirus crisis center said a further 174 people had died in the past 24 hours, bringing the total number of deaths to 6,532. The number of new cases had risen from 8,404 reported the previous day, but the daily death toll was lower than Wednesday’s 216 fatalities.

Russia has the third-highest number of coronavirus cases in the world, after the U.S. (with over 1.9 million cases) and Brazil (with more than 739,000 cases), according to Johns Hopkins University data. Russia’s low death toll has raised eyebrows with experts suggesting the true death toll could be much higher.

The grim milestone of 500,000 cases and high number of daily cases (albeit declining slowly) comes amid a relatively swift lifting of coronavirus restrictions that were imposed in late March. Russia allowed manufacturing and construction industries to reopen in mid-May, followed by more non-essential retailers reopening on June 1, ranging from hairdressers to pet stores.

Moscow, where the majority of cases and deaths have been recorded, started lifting lockdown measures in early June. It then announced Tuesday that it would abruptly lift remaining restrictions, including those around self-isolation, digital travel passes and a system of scheduled walks that allowed citizens to leave their homes at certain times and in certain areas.

The measures had been very unpopular with some Muscovites comparing the rules to George Orwell’s “1984” and the Gulag labor camps during the Soviet era, according to the Moscow Times.

Why are measures being lifted so quickly?

Analysts think the lifting of restrictions is coming deliberately early ahead of the June 24 Victory Day Parade in Moscow, an event that fosters national pride and seen as a key show of strength for President Vladimir Putin.

They also think that restrictions are being lifted ahead of Russia’s referendum on constitutional amendments on July 1. Among the changes being voted on is the amendments that would allow Putin to run for further terms in office beyond his current tenure that ends in 2024.

Daragh McDowell, head of Europe and principal Russia analyst at Verisk Maplecroft, told CNBC Wednesday that “the Victory Day parade is a major symbol of legitimacy for the Kremlin and it was only reluctantly rescheduled. Pushing the parade back further from 24 June is not an option.”

In addition, Putin is looking ahead to the referendum on July 1 and lifting measures early could secure the public’s approval in the vote at a time when his own approval ratings have fallen amid the crisis.

“Putin is aware that the more the perception takes hold that the government has mismanaged the pandemic, and the more his own approval ratings decline, the more difficult it will be to secure a ‘clean’ victory in the vote without having to resort to outright manipulation,” McDowell added.

However, McDowell noted that the biggest factor behind lifting restrictions may simply be lack of capacity to sustain a lockdown, with evident failures around measures designed to limit the spread of the virus.

“The tracing app released by Moscow city authorities (“Social Monitoring”) has had major issues and has issued repeated fines to compliant users. Reliable data on voluntary compliance with other lockdown measures, including social distancing and mask wearing, is patchy but reportedly quite poor,” he said.

“In short, it appears the Kremlin can neither implement an effective lockdown by either persuasion or coercion. Continuing to try enforcing one would undermine not only make the government appear incompetent, it would undermine the Kremlin’s image of unassailable power, which can be fatal for authoritarian states.”

While forthcoming political events are likely to be at the forefront of the Kremlin’s mind as restrictions are lifted, it can be said that Russia, along with its European neighbors, is just eager to return to some kind of economic and social normality.

Andrius Tursa, central and eastern Europe advisor at Teneo Intelligence, told CNBC Wednesday that, among other things, the lifting of restrictions reflected “mounting economic pressures,” and was also just a response to an improving epidemiological situation in the city, in line with many other countries.

“Although this raises the risk of renewed disease outbreak in the capital, Russia is no different from many other countries which have started lifting restrictions without seeing a significant drop in new infections,” he said.

Dmitry Peskov, Putin’s spokesman, told CNBC Tuesday that the coronavirus dynamics in the country were “quite positive” and that the lifting of restrictions was appropriate.

“We stable on the plateau and gradually of infections is decreasing day by day, although quite slowly,” he said, adding that there was no longer the danger that Russia’s healthcare system could be overwhelmed.

“The only thing we know is that now the situation is better and that gives us an opportunity to reopen Moscow and some other cities in Russia. Every regional government is taking its personal decisions, its their prerogative to take these decisions to reopen or to keep some sectors closed. But the general tendency (trend) is positive.”