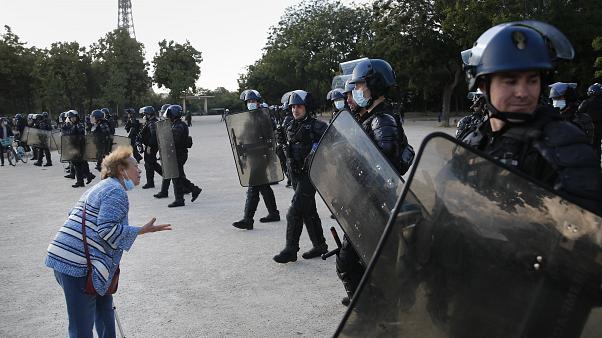 Spurred into action by the global movement of protest against racism and brutality in the police, France’s government on Monday cautiously began to acknowledge and address abuses that experts say have long been obvious to anyone who cared to look.

On the eve of his extraordinary election to the French presidency, Emmanuel Macron, France’s youngest leader since Napoleon, promised to lead an “uncompromising” fight against police violence and impunity.

“I want to change the culture, the management and the recruitment of French police,” the future president told news website Mediapart on May 5, 2017, ahead of his victorious run-off against the far right’s Marine Le Pen.

“When there is manifestly a problem, the police hierarchy must be challenged,” he added.

Three years on, the only tangible change is the widened gulf between French police and large swathes of the public.

Throughout 2019, fierce clashes between riot police and Yellow Vest protesters shed light on the fearsome weaponry and tactics used by law enforcement in France. More recently, the focus has shifted back to the festering issue of police racism and brutality in the immigrant-rich suburbs of France’s largest cities, on the heels of the global protest movement triggered by the George Floyd killing in the US.

On Monday, Jacques Toubon, France’s human rights ombudsman, raised the alarm over a “crisis of public confidence in the security forces”. In a wide-ranging report that makes for grim reading, Toubon urged a reversal of what he described as a “warring mentality” in law enforcement.

‘Yes, some officers are racist’

Defying police orders, tens of thousands of protesters gathered in Paris and other French cities last week to protest against police racism and impunity. Demonstrators voiced their support for the Black Lives Matter protests and demanded justice for Adama Traoré, a young black man who, like Floyd, died while in police custody in the Paris suburbs in 2016.

Chanting “No justice, no peace,” the protesters raged against the latest French government to have failed to deliver on promises of police reform.

“Macron’s election promises raised high hopes and expectations, but his silence on such matters has been a big disappointment,” said Carole Reynaud-Paligot, a historian and sociologist at the University of Dijon, who recently curated an exhibition on racism at the Musée de l’Homme in Paris.

Amid mounting pressure, the Elysée presidential palace on Monday said Macron had spoken to cabinet ministers over the weekend, urging them to come up with proposals to improve policing practices — and do so fast.

Hours later, Interior Minister Christophe Castaner unveiled a first batch of measures, including a ban on a controversial chokehold method of arrest that has been blamed for past fatalities. The minister said officers could be suspended on suspicion of racism and that the use of body cameras would be beefed up.

“Racism has no place in our society and even less in our Republican police. I will not let the hateful actions of some [officers] stigmatise the police as a whole,” Castaner told reporters. He added: “I refuse to say that the [police] institution is racist, but yes some police officers are racist.”

Though Castaner spoke at length in support of the police, his acknowledgement of racist incidents marked a rare concession from a minister who had so far strenuously denied police malpractice. It came days after media outlets published the contents of a private Facebook group on which French officers repeatedly used racist and sexist terms and mocked victims of police brutality.

“These things have been known for a long time, but people closed their eyes or pretended not to see,” said Reynaud-Paligot, referring to the kind of racist language witnessed in the officers’ social media exchanges. She added: “How could such language coming from civil servants ever be tolerated?”

‘There is no such thing as police violence’

Closing one’s eyes to rampant racial inequality has long been a favourite escape for French politicians, safe in the knowledge that the Republic’s egalitarian ideals preclude any form of prejudice.

Reflecting on this tendency, former justice minister Christiane Taubira, one of only a handful of high-ranking black ministers to have served under France’s five republics, warned on Sunday that the credibility of French institutions was at stake.

“We cannot allow law enforcement to be decredibilised based on the assumption that racism and abuses [by the police] are impossible,” Taubira told French daily Le Journal du Dimanche. “The entire institution ends up tarnished when it feels obliged to cover up racist acts.”

Macron himself was accused of seeking to suppress all debate when he argued, at the height of the Yellow Vest crisis, that “[o]ne cannot speak of police violence in a free state governed by the rule of law”.

Christian Jacob, leader of the conservative Les Républicains party, adopted the same reasoning at the weekend, stating that “[t]here is no such thing as police violence in France, it’s a lie”.

Speaking just a day after Floyd’s death by suffocation was captured in chilling footage seen by millions around the world, Eric Ciotti, a member of Jacob’s party, went so far as to call for all journalists and bystanders to be barred from filming police officers in action.

Seldom is this wilful myopia as pronounced as in the field of race — a word so taboo in France’s supposedly colour-blind Republican tradition that French lawmakers sought to remove it from the Constitution two years ago.

While France famously doesn’t compile official statistics based on faith, ethnicity or skin colour, racial discrimination by law enforcement has been widely documented.

A study conducted by France’s National Centre for Scientific Research has shown that blacks are 11.5 times more likely to be checked by police than whites, and those of Arab origin are seven times more likely. In a landmark 2016 case, France’s highest court ruled for the first time that police had illegally stopped three men based on racial profiling, setting more specific rules to ensure ID checks are not discriminatory.

France’s intersecting social and racial inequalities were once again exposed during the nationwide lockdown imposed in mid-March to stem the spread of Covid-19.

On the first day of confinement, the Seine-Saint-Denis department northeast of Paris – home to France’s poorest and most immigrant-rich districts – accounted for 10 percent of all fines handed out for breaching the lockdown, despite comprising just over two percent of the country’s population. Over the subsequent weeks, videos of heavy-handed and racially-charged arrests circulated widely on French social media, prompting outrage.

“There is a real problem of systemic racism in the police and it’s strangling the population,” said Noam Anouar, a member of the left-wing police union VIGI, in an interview with FRANCE 24. But “when you try to denounce it, they [the institution] pounce on you at the slightest faux pas”, he added, noting that he had been threatened with a two-year suspension for reporting racist taunts to the police’s internal inspectorate.

Writing on The Conversation, Jacques de Maillard, a professor of political science at the University of Versailles and Saint-Quentin (UVSQ), said the long history of discrimination in the United States “offers us a mirror — but one that we refuse to look into”.

“To say that French police is not racist simply because it is republican is to dodge the key question: there is a problem of discrimination towards minorities,” de Maillard wrote. “To deny this problem, is to preclude any chance of finding an answer.”