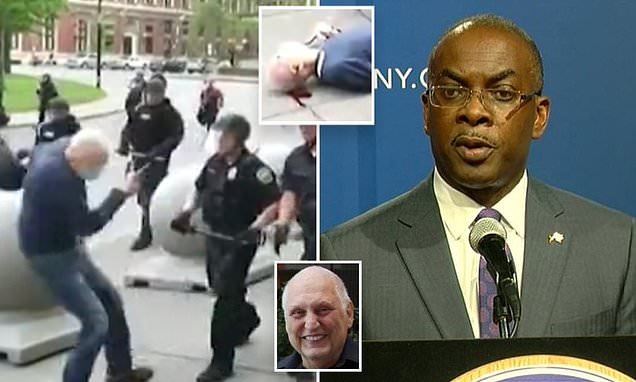 Byron Brown, the mayor of Buffalo, N.Y., said Friday the 75-year-old man who was shoved to the ground by two cops the previous day was an “agitator” who had been asked to leave the area “numerous” times.

The officers have been suspended without pay and an internal affairs investigation launched after the incident was caught on video and showed the man, Matin Gugino, bleeding on the sidewalk. Gov. Andrew Cuomo said the video made him “sick to my stomach”. The officers are expected to be charged with assault Saturday morning, according to WKBW Buffalo.

Gugino was caught on camera being shoved to the ground by officers in tactical gear shortly after a curfew went into effect near Niagara Square. In this image from video provided by WBFO, a Buffalo police officer appears to shove a man who walked up to police Thursday, June 4, 2020, in Buffalo, N.Y. (Mike Desmond/WBFO via AP)

In the video, Gugino can be seen approaching a large group of officers. Someone is heard shouting, “Push him back!” One officer raises his baton over the man while another pushes him in the chest. He stumbled backwards and falls on the pavement. A pool of blood can be seen slowly forming around his head.

Although Brown was swift to suspend the officers, the action prompted a backlash from the police’s Emergency Response Team, with 57 officers resigning in support of their colleagues.

“What we were informed of is that that individual was an agitator. He was trying to spark up the crowd of people. Those people were there into the darkness. Our concern is when it gets dark, there is a potential for violence,” Brown said.

READ  Coronavirus could drive half a billion people into poverty worldwide, warns Oxfam Martin Gugino, a 75-year-old protester, lays on the ground after he was shoved by two Buffalo, New York, police officers (Jamie Quinn/Handout via REUTERS)

“There has been vandalism, there have been fires set, there have been stores broken into and looted. According to what was reported to me, that individual was a key major instigator of people engaging in those activities,” the mayor said.

Brown said he will not insist that the two cops be fired because they need to get “due process”.

When asked about the 57 members who resigned from the team, he said the city had “contingency plans” and assured residents that “Buffalo will be safe this weekend.” Cuomo revealed Friday he had spoken to the victim, a longtime peace activist from Amherst. The governor praised the swift suspension of the officers but pressed for disciplinary action against them. “I think the city should pursue firing,” Cuomo said. “And I think the district attorney should look at the situation for possible criminal charges.”

The Erie County District Attorney’s Office announced earlier in the day that it will be investigating the incident.

READ  Italian Man Infected With Coronavirus Has Fully Recovered, To Be Discharged Soon