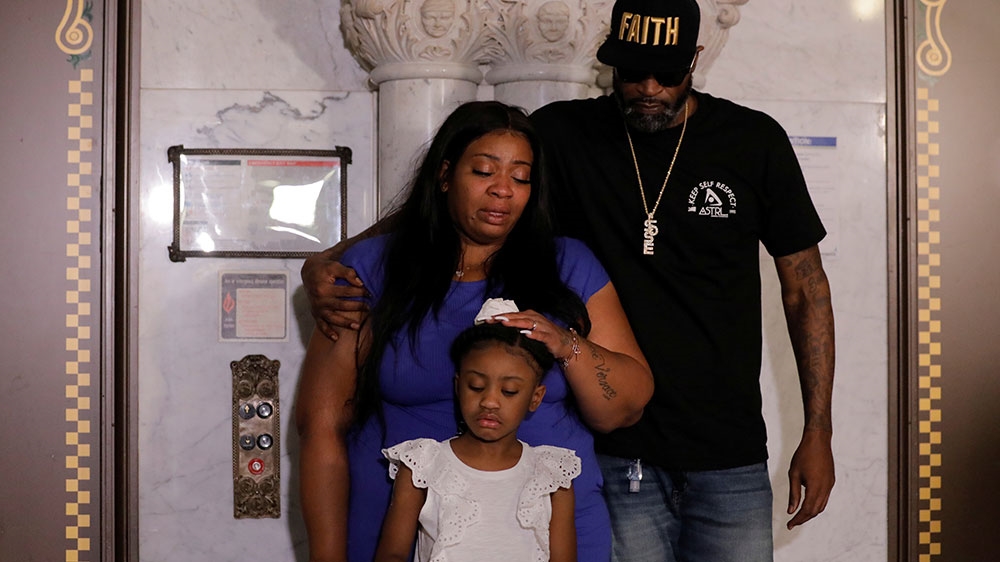 Through tears, the mother of George Floyd’s six-year-old daughter, Gianna, made an emotional plea for the world to remember Floyd as a good father and good man, not just a name or a rallying cry.

“I wanted everybody to know that this is what those officers took from me,” Roxie Washington said, Gianna standing by her side.

“At the end of the day, they get to go home and be with their families,” she added. “Gianna does not have a father. He will never see her grow up, graduate. He will never walk her down the aisle. If there’s a problem she’s having and she needs a dad, she does not have that any more.”

Washington’s heartbreaking comments came more than one week after Floyd, an unarmed Black man, died after a white officer knelt on his neck for nearly nine minutes in Minneapolis, Minnesota, setting off mass protests across the United States.

A video of the incident shows Floyd repeatedly pleading “I can’t breathe” before going motionless, still under the officer’s knee.

“The image that most of us have of George Floyd is the horrible video that we’ve seen,” said Floyd family lawyer, Chris Stewart, alongside Washington and Gianna.

“We’ve seen the anger in the streets; we’ve seen so much violence; we’ve seen beauty, also. We’ve seen people standing up and speaking up, and we’ve seen massive changes across the country,” he added. “But what we really wanted the world to see is the beauty of their child. The beauty of Gianna who is going to be taller than me soon, just like her dad. The beauty of Roxie who is holding up strong throughout this. And the actual situations in life that these things affect.”

County and private medical examiners have both ruled the autopsy a homicide, but they differed on how Floyd died.

The private autopsy, requested by Floyd’s family, found that the 46-year-old died of asphyxiation due to neck and back compression by police, according to the Floyd family lawyers.

The Hennepin County Medical Examiner found that Floyd “experienced a cardiopulmonary arrest while being restrained by law enforcement officer(s)”. It said Floyd suffered “other significant conditions”, including heart disease and hypertension, fentanyl intoxication and recent methamphetamine use.

All four officers involved in the incident were fired a day after Floyd died.

The officer who knelt on Floyd’s neck has since been arrested and charged with third-degree murder and second-degree manslaughter.

But Floyd’s family, community leaders and protesters want the three other officers involved charged, as well.

“I’m here for George because I want justice for him,” Washington said.

‘A father was taken’

Earlier on Tuesday, at the intersection where Floyd died, Bishop Harding Smith, remembered Floyd as a giver.

“He’s someone that I knew very well, and the love and support you see out here,” Smith told Al Jazeera.

“You see, Floyd used to help me outside the Salvation Army feed the homeless,” Smith said.

Flowers have grown out of the concrete 38th Street and Chicago Avenue. Signs, cards, candles fill the cracks between the bouquets in the street that have taken over the street as a memorial to Floyd. Protesters gather at the site daily.

“I have mixed emotions: hurt, and pain, and disgust,” said Kim Anderson, 56, as she paid her respects.

READ  Insurgency: Every lost soul is precious to God whether Christian or Muslim, says Adeboye

“It’s about time,” she added, speaking about the need for people to come together and get justice.

Her call echoed that of Floyd’s family.

“I want justice for him,” Washington said. “No matter what anybody thinks, he was good. And this is the proof that he was a good man,” she added, looking at Gianna.

Stewart added for every family affected by police brutality, the grief goes much deeper than that of any protest or call.

“It’s not just that someone passes and people are angry in the streets,” he said. “It affects people’s actual lives and their futures. A father was taken. A brother and sister lost another brother.”