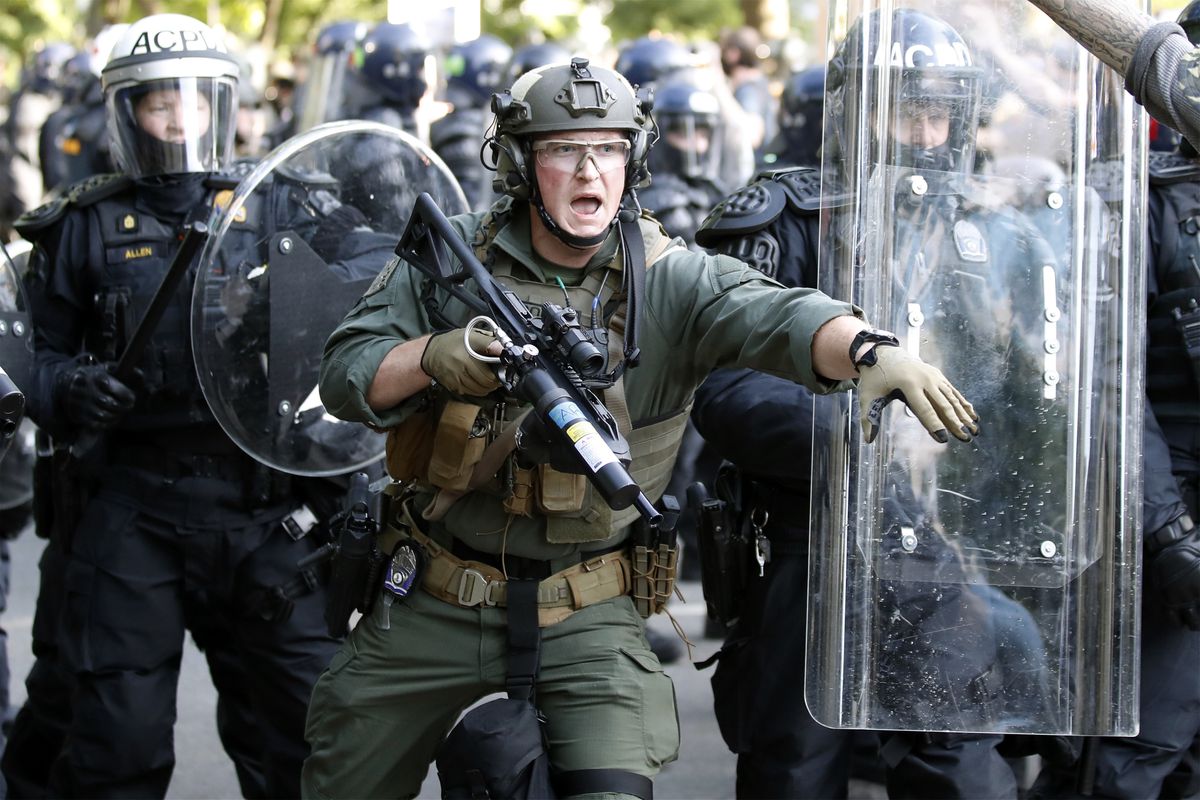 Minutes before US President Donald Trump was scheduled to speak from White House Rose Garden on Monday, flash bangs, rubber bullets and tear gas were fired at nearby crowds protesting peacefully against the death of George Floyd, an unarmed Black man who died a week ago after a white officer knelt on his neck for several minutes.

As Trump took the podium, declaring he was a “president of law and order”, more tear gas filled the air.

“Mayors and governors must establish an overwhelming law enforcement presence until the violence has been quelled,” said Trump, who had temporarily been taken to an underground bunker on Saturday. “If a city or state refuses to take the actions that are necessary to defend the life and property of their residents, then I will deploy the United States military and quickly solve the problem for them.”

With the area clear outside the White House, Trump then made an unexpected walk from his residence, across Lafayette Park – where protests against police brutality have taken place for days – and to the historic St John’s Episcopal Church, that was damaged during unrest the night before.

He paused for an apparent photo-op, posing with members of his administration, and holding up a Bible.

The rare moment came just as a curfew in the nation’s capital took effect. The city’s mayor, Muriel Bowser, moved up the curfew four hours from the previous day’s, when peaceful protests turned violent as the sun fell.

Multiple national monuments had been scrawled with graffiti, and several businesses were looted over the course of Sunday evening. Police fired rubber bullets and tear gas at demonstrators who defied that night’s 11pm curfew. Eighteen people were arrested.

“The core of it is outrage over George Floyd’s killing in Minneapolis,” said Natalie Hopkinson, an assistant professor in Howard University’s Department of Communication, Culture and Media studies.

Katie, who came from Arlington, Virginia, with her friend to clean up the streets around the White House on Monday morning, said picking up rubbish and sweeping up glass was the least she could do.

“The protesters who were out risking their lives shouldn’t have to clean up,” Katie, who only wanted to be referred to by her first name, told Al Jazeera, adding that she watched Sunday night’s events on television.

“I think the protests should continue until real change is achieved,” she said.

Derek Chauvin, the police officer who knelt on Floyd’s neck has been fired and charged with third-degree murder and second-degree manslaughter. Demonstrators are demanding the arrest of the three other officers involved in the incident. An autopsy report released on Monday said Floyd’s death was a homicide.

Dozens of cities across the US were under similar curfews to the one imposed in Washington, DC, in events that have been likened to the riots following the 1968 assassination of civil rights leader Martin Luther King Jr.

Late on Monday, Mayor Bowser expressed outrage by the incident outside the White House as Trump spoke.

“I imposed a curfew at 7pm,” she tweeted. “A full 25 minutes before the curfew & w/o provocation, federal police used munitions on peaceful protestors in front of the White House, an act that will make the job of @DCPoliceDept officers more difficult. Shameful!”

The latest demonstrations also come after weeks of lockdowns due to the coronavirus pandemic, which has killed more than 100,000 Americans, seen tens of millions lose their jobs and has disproportionately affected people of colour, and lower-income communities.

“People saw how policymakers responded to the COVID crisis, again following along racial and economic lines,” Hopkins added referring to the disproportionate rate of infections and death among African Americans. “There’s a lot of pent up anger.”

Earlier in the day in Lafayette Park, protesters, some carrying signs, gathered while onlookers walked by snapping photos of the graffiti and the charred stone left behind by a fire.

“It’s about time for real change in this country,” said Carlton, a resident of Washington who only wanted to be referred to by his first name.

He came to withdraw money from the ATM in downtown Washington, but the exterior glass was shattered, and the machine was out of order after it had been spray-painted in red with an expletive against the police.

“I am against looting, but what happened [to Floyd] was outrageous,” Carlton said.