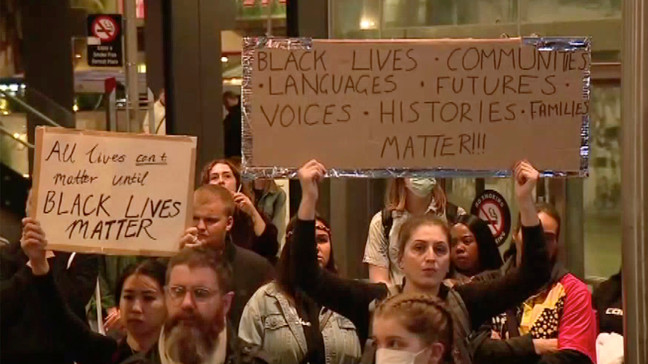 The United States has been gripped by protests over the death of George Floyd, an unarmed Black man who died last week in police custody in Minneapolis, Minnesota, and police brutality nationwide.

Lawyers representing the Floyd family said independent medical examiners who conducted an autopsy on Floyd’s determined that asphyxiation from sustained pressure was the cause of death.

Protesters are demanding all four officers involved be charged in Floyd’s death. So far, only one – white officer Derek Chauvin, who knelt on Floyd’s neck for nearly nine minutes as the Black man pleaded, “I can’t breathe” – has been arrested and charged on Friday with third-degree murder and manslaughter.

Those protesting against police brutality have been met with, at times, excessive force by authorities. Two officers were fired over the weekend in Atlanta, Georgia, for pulling two Black people out of a car and throwing them to the ground. Videos have shown police targeting angry but peaceful protesters with tear gas and mace. Journalists have also been targeted by police.

Protesters have remained undeterred by curfews and the presence of the US National Guard in some cities. Some largely peaceful protests turned violent, with looting and vandalism as the night raged on.