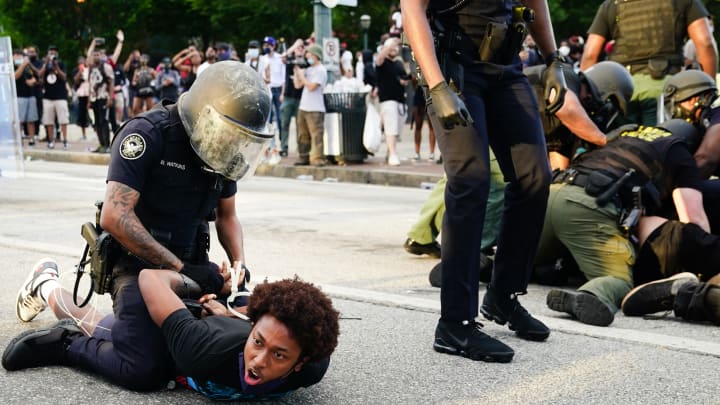 Hundreds of people were arrested over the weekend as protesters and police clashed in cities across America after the killing of George Floyd, an unarmed black man, at the hands of Minneapolis police sparked more than 100 protests, rallies and vigils, according to NBC News.

Mayors of major cities from Los Angeles to Philadelphia to Atlanta imposed curfews and at least 12 states, as well as Washington, D.C., activated National Guard troops in an effort to keep the peace, but protests in several cities descended into violence again as tensions boiled over.

Derek Chauvin, the officer filmed kneeling on Floyd’s neck, was arrested and charged with murder and manslaughter.

The social unrest over police brutality comes in the midst of the ongoing coronavirus pandemic, which has killed more than 100,000 Americans and led to the worst unemployment since the Great Depression. The unemployment rate hit 14.7% in April, a post-WWII record, and is likely to rise above 20%.

The black community has been hit disproportionately hard by Covid-19. Nearly 23% of all deaths from the pandemic are African American even though black people make up about 13% of the U.S. population, according to the Centers for Disease Control and Prevention.

This is CNBC’s live blog covering all the latest news on the demonstrations gripping the U.S. This blog will be updated throughout the day as the news breaks.

Many cities and local governments across the country had imposed curfews for Sunday night. Here is a partial list of the cities that have announced such measures. All times are in the local time for the city.