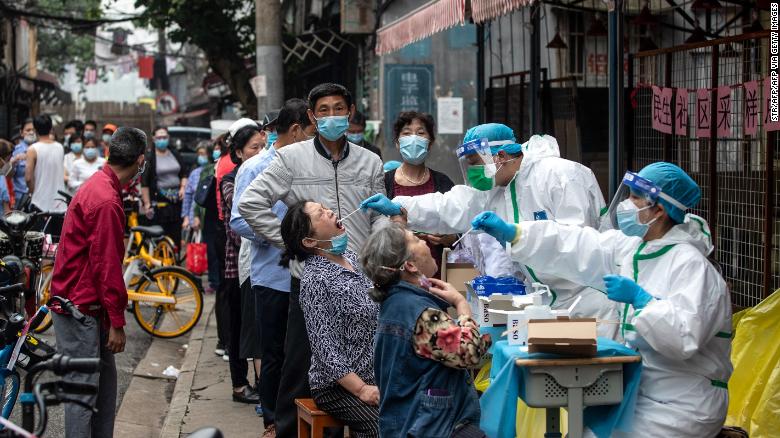 The central Chinese city of Wuhan conducted more than 6.5 million novel coronavirus tests in just 9 days, according to state media, a drastic move by authorities to prevent a second wave of infections in the original epicenter of the global pandemic.

From May 15 to May 23, swab test samples were collected from more than nine million residents, China’s state-broadcaster CCTV reported, accounting for more than 80% of the city’s total population of 11 million.

Nucleic acid tests work by detecting the virus’ genetic code, and can be more effective at detecting the infection, particularly in the early stages, than tests which examine a body’s immune response, though the latter are easier to conduct.

The mass testing identified 198 asymptomatic cases — people who carry the virus but do not show symptoms, according to the state-run Health Times.

The speed and scope of Wuhan’s testing campaign — hailed as a “10-day battle” by local authorities — appears to have equaled or eclipsed the testing ability of many countries, including that of the United States.

On Friday alone, Wuhan conducted 1.47 million tests, according to CCTV.

In the US, the highest daily number of coronavirus tests conducted across the entire country currently stands at 416,183, according to Johns Hopkins University, which draws on data from the Covid-19 Tracking Project.

In total, the United States has performed 14,131,277 coronavirus tests since the pandemic began, according to the latest data from the US Centers for Disease Control and Prevention. However, that number also includes antibody tests performed in some states, which aren’t used to diagnose current infections but to indicate whether someone has been exposed to the virus in the past.

In Wuhan, sampling booths were set up in neighborhoods across the city, with residents in face masks lining up to take their swab tests. On Saturday, authorities set up 231 extra testing booths for people who had not been able to make the earlier tests, according to the Changjiang Daily, the official Communist Party mouthpiece in Wuhan.

According to Chinese news outlet Caixin, in order to test quickly and widely, Wuhan’s health authorities combined some of the samples taken from multiple individuals together and tested them in a single tube — a method known as “pool testing.”

If a tube of pooled samples was tested positive, extra tests would be carried out on each individual’s sample separately to find the positive sample, the Caixin report said. It was unclear from the report what percentage of samples in Wuhan had been pooled for testing.

CNN has reached out to the Wuhan Health Commission for comment on the pooled sampling procedures but has not heard back.

In April, scientists in Germany proposed the pooling of coronavirus samples as a strategy to boost testing capacity when large numbers of asymptomatic people need to be screened, according to their research published in the medical journal The Lancet.