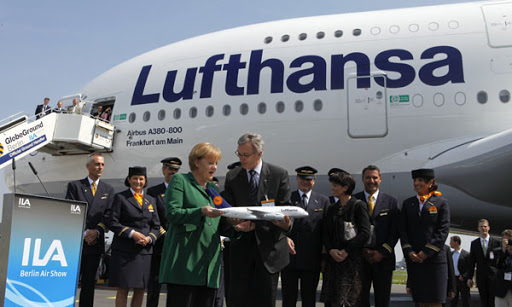 Talks over a €9 billion plan to save national German carrier Lufthansa could soon reach a conclusion, chancellor Angela Merkel said on Thursday.

“The German government is in intensive talks with the company and the EU Commission. A decision is expected shortly, but I cannot give any details about ongoing talks”, Merkel said.

Lufthansa confirmed that an intervention by the Geman government is now close.

Ryanair’s O’Leary slams ‘state aid junkies Lufthansa and Air France’
“The project provides for stabilisation measures up to €9 billion euros, including €3 billion in the form of a loan”, which would come from public investment bank KfW, according to Lufthansa.

If the plan is finalised, the German government would take up a significant stake of the airline – the second in Europe for number of passengers carried.

The federal government’s economic stability fund (WSF), which was created to cushion the impact of the coronavirus pandemic, would acquire 20% of the capital, as well as bonds convertible into shares worth “an additional 5% plus one share”, Lufthansa detailed.

The bond convertibility could be exercised by the government to stop “a takeover bid by a third party”.

If the project goes ahead, it would close weeks of controversy between the conservatives (CDU) of Angela Merkel and her social democratic (SPD) coalition partners,

Germany’s DPA news agency reported Wednesday that Lufthansa shares rose in after-hours trading on the back of rumours that a deal had been reached.

An agreement could be formalised as early as Thursday.

The company, which employs nearly 140,000 people worldwide, is going through a serious crisis, with around 700 of its 760 aircraft grounded, and over 60% of its employees doing part-time work.

READ  Senate To Invite NPA, NIMASA, Others, Over Apapa Gridlock

However, the company is also getting ready for non-essential air traffic to resume, as it announced on May 20 a new “highly-flexible” booking process.