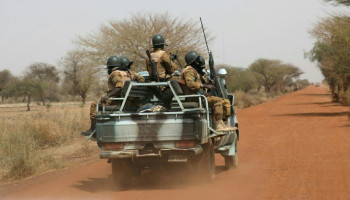 A Burkina Faso prosecutor has launched an investigation after 12 people died during the same night in detention cells, hours after they were arrested for suspected terrorism-related offences in a town in the east of the country.

The prosecutor, Judicael Kadeba, said in a statement late on Wednesday the incident took place the town of Fada N’Gourma, around 220km (137 miles) east of the capital Ouagadougou.

He said 25 people were arrested during the night of May 11 – 12 by Burkina Faso security and defence forces for suspected terrorism in a village in the Fada N’Gourma area.

“Unfortunately 12 of them died during the same night in cells where they were being held,” Kadeba said.

Burkina Faso has been battling armed Islamist insurgents, some with ties to al Qaeda and Islamic State, since 2017.

The militants have strengthened their foothold in the northeast and eastern parts of the country around the tri-border region with Niger and Mali, known as the Liptako-Gourma region.

HRW said in April the militants have killed more than 300 civilians in Burkina Faso, while the government has killed several hundred men for their alleged support of the groups.

Burkinabe officials have promised to investigate similar allegations in the past, but rights group say the government has not done enough to hold perpetrators accountable.