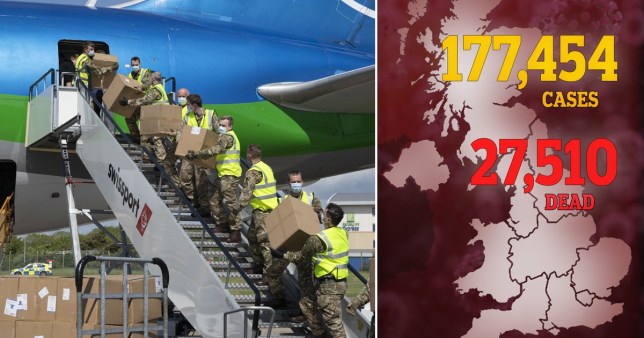 The UK coronavirus death toll has jumped to 27,510 after another 739 people were confirmed dead.

The Government’s official figures now include deaths in care homes and the wider community after the Department of Health began counting them on Wednesday. Previously, the Government only counted people who had died in hospitals after testing positive for coronavirus.

Earlier today, it emerged that another 427 died of coronavirus in UK hospitals. The number was updated after England recorded another 352 hospital deaths, Scotland reported 40 deaths, while 17 were recorded in Wales and 18 in Northern Ireland.

With the UK’s coronavirus death toll now the third highest in the world after the US and Italy, Downing Street is playing down any expectations of an easing of restrictions.

No10 is set to publish an exit strategy next week but has refused to put a timeline on when this could be triggered, saying the UK must pass five tests before restrictions can be loosened.

Critics have blamed the government’s slow response to the virus on the grim death toll, particularly its efforts to ramp up testing.

Today, Mr Hancock confirmed the government hit its 100,000 a day target it pledged to reach by the end of April. He said 122,347 tests were performed in the 24 hours up to 9am on Friday.

The government was widely expected to miss the target, after figures from the start of the week showed just 43,000 people were being tested per day, despite capacity for 73,000.

READ  Nigerians who rule the world

Yesterday, Boris Johnson revealed 81,000 people had been tested on Wednesday, suggesting a huge surge of tests being carried out in a matter of days.

Today it was revealed the Department of Health is now including tests that have been posted or delivered to people’s homes in its figures.

This means tests which are sent to people are counted before the recipient has provided and returned their sample to a laboratory.

Mr Hancock said: ‘ At the beginning of last month, at this podium, I set a goal that anyone who needs a test should get a test, and that as a nation we should achieve 100,000 tests per day by the end of the month.

I can announce that we have met our goal. ‘The number of tests yesterday, on the last day of April, was 122,347.

This unprecedented expansion in British testing capacity is an incredible achievement, but it is not my achievement.

It is a national achievement, achieved by a huge team of people working together.’