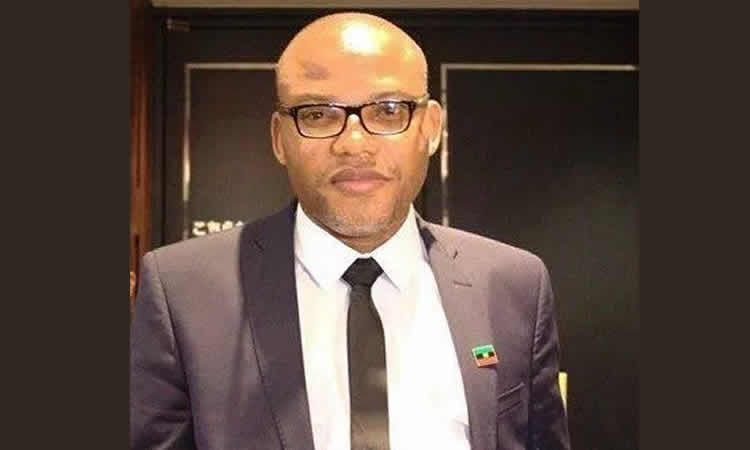 Is Nnamdi Kanu dead? Is the question on the lips of many as “Igbos in Nigeria” mourn the IPOB leader.

This online news platform understands that the news of Nnamdi Kanu’s death first emerged on the micro-blogging site, Twitter last week when Miss Olunloyo tweeted that the IPOB leader was dead and had been cremated in Italy.

However, a day after the tweet, Olunloyo took to Twitter again to retract her claims, saying she confirmed from Femi Fani-Kayode, a former Nigerian Minister who is Nnamdi Kanu’s ally, that the IPOB leader is hale and hearty and not dead as earlier claimed by her.

Naija News had reported earlier that Kanu delivered a live broadcast on Sunday on Radio Biafra, where he accused the people in Aso Rock and Chinese doctors of being responsible for the deaths in Kano state, northern Nigeria.

Reacting to the live broadcast, Olunloyo insisted that Nnamdi Kanu is dead and that person that spoke as the IPOB leader during the live broadcast on Radio Biafra on Sunday, was “physically in Nigeria doing his voice over.”

The controversial journalist tweeted: “Nnamdi Kanu has died and gone. The person on a radio/video show yesterday didn’t have to hide their face. That person was physically in Nigeria doing his voice over. As a broadcaster, I can do voices of many public figures.”

Medical Journalist Dr. Kemi Olunloyo@KemiOlunloyo
Nnamdi Kanu has died and gone. The person on a radio/video show yesterday didn’t have to hide their face. That person was physically in Nigeria doing his voice over. As a broadcaster, I can do voices of many public figures. #RIPNnamdiKanu. She added hours later: “I don’t spread unverified news.”

With the rumour of Nnamdi Kanu’s death gaining momentum, a group identified as Igbos in Nigeria Movement (INM), has issued a statement, condoling with the family and friends of Nnamdi Kanu over the alleged demise of the IPOB leader.

In a statement signed by its President Mazi Ifeanyi Igwe, on Monday, INM said the IPOB leader “succumbed to a combination of spiritual factors and complications from COVID-19 in Europe sometimes this month.”

Although INM differed with Kanu’s approach towards the liberation of the Igbos, regardless, it said his passing will cost the south-east the diversity of voices championing their cause, the group, however, urged Ndigbo and all Nigerians not to desecrate his memory by impersonating him, “using body doubles and doppelgangers, issuing statements in his name and continuing to operate his social media account to create the impression that he is still alive.”

The statement reads as thus; “Igbos in Nigeria Movement regrets to announce the passing of the first son of the late Eze Israel Kanu of Afara Ukwu Umuahia in Abia State, Mazi Nnamdi Kanu who succumbed to a combination of spiritual factors and complications from COVID-19 in Europe sometimes this month. His passing is particularly painful considering the losses that his family has suffered in recent months.

“We use this medium to express our heartfelt condolences to his immediate and extended family members and to the entire Igbo nation. We pray that God Almighty grants him eternal rest and that his ancestors overlook his shortcomings.

“While we differed with Nnamdi Kanu in his lifetime over his approach towards the quest to improve a lot of the Igbos, we must state that his passing will cost the south-east the diversity of voices championing the cause of our people. We consequently appeal to Ndigbo and all Nigerians to not desecrate the memory of the departed in keeping with the tradition of not speaking evil of the dead by impersonating the late Nnamdi Kanu or using fake identities to continue his struggles.

“We, therefore, call on the Indigenous People of Biafra (IPOB), which Kanu passionately led while alive, to cease all efforts at impersonating him by using body doubles and doppelgangers, issuing statements in his name and continuing to operate his social media account to create the impression that he is still alive. Such gimmicks re-open the wound of Kanu’s bereaved family each time they are employed and are barely worth propaganda value they are intended for.

“Those behind the body double gimmicks should refrain from doing so because Nnamdi Kanu was an illustrious son of Igboland and Igbos would like to bury him in a befitting way. He should not be made a caricature of as is being currently done.

“Igbos in Nigeria Movement wants to further appeal to law enforcement agents and the military that it is time to move on and allow Nnamdi Kanu to find in death the peace that eluded him in life. We make this appeal because the dedication with which these agencies carried out their duty must have contributed to Kanu’s demise by making it impossible for him to bury his father as prescribed by tradition as he feared being arrested during the funeral rites.

“Although he reportedly died of complications from COVID-19, according to the death certificate issued to his family, there is every likelihood that the gods merely took advantage of the virus to visit calamity upon him for failing to perform the customary rites during his father’s funeral because he was on the run from justice. So, while the cause of death appears to be coronavirus, the discerning Igbo knows that the real issue is Ofor-t’Ofor as captured in Igbo spirituality,” the statement.