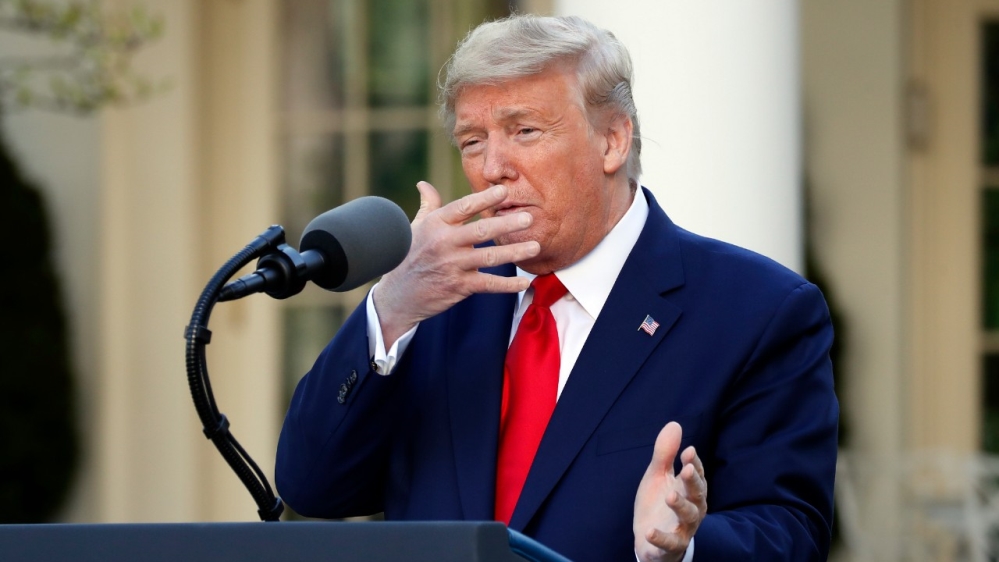 US president says Beijing could have stopped the virus from becoming a pandemic and says will conduct an investigation.

US President Donald Trump has renewed his attack on China over the spread of the coronavirus, saying Beijing could have stopped the disease before it swept the globe. He promised to conduct “serious investigations” into China’s handling of the pandemic.

Trump lashed out at China as he projected that the death toll in the US from COVID-19, the disease caused by the coronavirus, could reach 70,000.

“We’re doing very serious investigations … We are not happy with China,” Trump said during a White House news conference. “There are a lot of ways you can hold them accountable.”

Trump’s criticism was the latest from his administration to target how China’s managed the coronavirus outbreak, which began late last year in the Chinese city of Wuhan and grew into a pandemic.

Trump had previously referred to COVID-19 as “Chinese virus”, igniting a war of words with Beijing, which accused the US military of bringing the disease to Wuhan.

Last week, Secretary of State Mike Pompeo said the US “strongly believed” Beijing failed to report the outbreak in a timely manner and covered up the danger posed by the respiratory illness.

The coronavirus outbreak has killed more than 211,000 people around the world, including more than 56,000 in the US, according to data compiled by Johns Hopkins University.

Earlier on Monday, White House trade adviser, Peter Navarro also accused China of sending low-quality and even counterfeit coronavirus antibody testing kits to the US and of “profiteering” from the pandemic.

Navarro, an outspoken critic of Beijing whom Trump has appointed to work on supply-line issues relating to the health crisis, said more testing both for the virus and antibodies was vital to getting Americans currently in lockdown back to work.

“That’s where, perhaps, we can find people who are immune, that can be in the workplace in a more safe environment. But we can’t have China, for example, bringing in those fake tests and counterfeit tests, because that’s going to be very disruptive,” Navarro said in an interview on TV network Fox News.

“There’s a lot of these antibody tests coming in from China now that are low quality, false readings and things like that,” he said.

The US is heavily reliant on China for basic equipment and drugs.