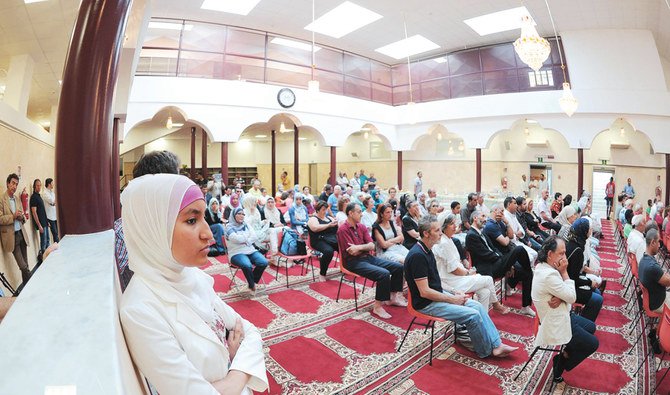 Mosques around Italy are relying on technology to build community spirit after being forced to abandon the traditional Ramadan “open day” during the country’s coronavirus lockdown.

“Moschee aperte,” an annual Ramadan event when Islamic places of worship welcome the wider community, has been called off in major cities, including Turin, the industrial capital in Italy’s northeast, where the number of infections shows no sign of falling.

Said Hadine, a spokesman for the Vallette Mosque in Via Sansovino, one of Turin’s oldest, said that extra efforts are being made to strengthen community solidarity in the face of the pandemic.

“Each Muslim will transform their home into a mosque and their family into a community. All these communities will always be united,” he said.

Taraweeh, or evening prayers, and sermons from the mosque will be transferred online, Hadine said.

However, the traditional gathering in Turin’s central Parco Dora to mark the end of Ramadan has been called off.

The celebration, held under a huge canopy, draws thousands of people every year.

Despite struggling financially because of coronavirus restrictions introduced in early March, mosques in Turin and around the country are working hard to help the community.

“At the beginning there was confusion on what we could and couldn’t do,” Hadine said.

“After the mosque was closed along with churches all over Italy, we began to bring food parcels to those who needed help — both to our faithful and to their neighbors. We do not make distinctions,” he added.

Brahim Baya, of the Taiba Mosque in Via Chivasso, in Turin, said that last year up to 4,000 people gathered for Ramadan in the city.

“This moment is difficult, but we will find a way to be united, even if we are apart, by using new technologies and the internet,” he said.
“While we pray on various social networks, we have to stay close in this holy month, especially with those in need and in hardship. We talk to people who have been locked in their homes for weeks, whose shops or businesses have closed so they have no income.”

In Italy, where Muslims make up almost 5 percent of the population, the country’s 1,100 mosques — along with other places of worship — will remain closed until at least May 4 to comply with the government measures to curb the spread of the virus.

From the country’s north to south, Ramadan is being welcomed with online prayers and expressions of solidarity.

In Palermo, the Tunisian community is offering free meals to needy families in the Sicilian capital.

“We serve 150 free meals a day,” said Hafedh Rashas, who owns a restaurant in the city center.

“As the business is closed for the lockdown, we decided to prepare meals and deliver them to those in need as long as we have money to buy food. We do not send meals only to Muslims but to all those who ask for help during this hardship,” he said.

“We must stand united, especially when Ramadan comes. We need to be close to one another and help those who are having a difficult time. We have to be even closer when we cannot meet at night, cheer and share our experiences.

READ  How we moved N200m cash from Fayose’s residence – Banker

“That is why we are making an effort to reach whoever is in need, so that this holy time of the year can be lived properly,” Rashas said.