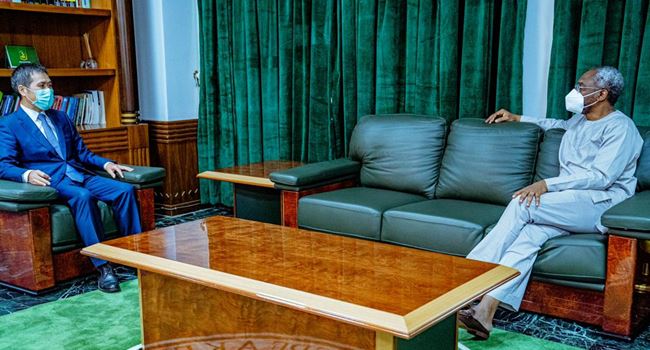 The Speaker of the House of Representatives, Femi Gbajabiamila, has condemned the inhuman treatment meted out on some Nigerians by the Chinese authorities in Beijing.

Gbajabiamila stated that China must explain its action against Nigerians, he further stated that the House is waiting to hear from the Chinese ambassador at least by Tuesday next week.

The Speaker stated this on Thursday during a meeting with Zhou Pingjian, the Chinese Ambassador to Nigeria.

He challenged Pingjian with the protest video of the incident, where a Nigerian was seen challenging Chinese officials over the maltreatment.

The Speaker noted the viral videos showed some Nigerians been forced into another 14-day quarantine after the initial 14 days they spent for the same purpose over the COVID-19 pandemic in China.

Gbajabiamila told Pingjian that there should be an official explanation for treating Nigerians in such a manner.

He demanded to know if the Chinese Ambassador has taken up the issue with his home country, adding, “If the diplomatic relationships between our two countries are for the mutual benefits of our citizens, then there must be respect for our citizens, and we should not compromise it.”

“The way you treat your citizens, we expect that’s how you’ll treat others. We will not tolerate our citizens breaking your laws, but the crime of one citizen cannot be used to stigmatize the whole country.”

“It appears that’s what happened in this case. You can’t use one brush to smear the whole wall. Whatever the reason, it cannot be used and taken out on the entire community in China”.

Ambassador Pingjian in his response noted that he has not been officially informed about the details of the incident, but will take it up with his government.

Speaking further, Gbajabiamila said the House will expect feedback from the Ambassador as soon as possible, saying “We are glad you are looking into it but we are hoping to have it at least by Tuesday.”

“It is better we nip it in the bud so that it doesn’t escalate to another level. So, by Tuesday, if you have the information to give us if steps have been taken, let’s talk about it and let’s see the way forward.”