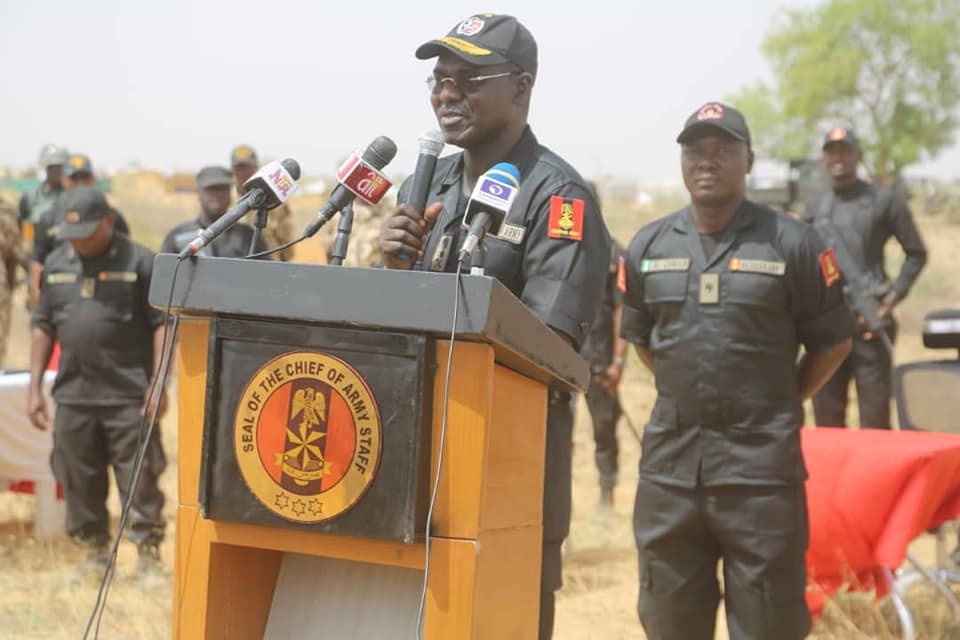 The Chief of Army Staff Lt. Gen. Yusuf Tukur Buratai has declared his interest to at this time remained in the Northeast and never return back to the federal capital territory, Abuja, until he, alongside his troops, substantially defeated Boko Haram insurgent in the region.

Buratai vowed to remain with the theatre of Operation Lafiya Dole until he delivered the Northern region and the country at large from the hand of the terrorists.

While addressing the troops of Special Super Camp Ngamdu in Kaga Local Government Area of Borno State on 9 April 2020, after his return to the North East to lead the troops, Buratai said that he will be with them to the nooks and crannies of the theatre.

According to the COAS, the insurgency has lasted for too long in the country, but he boasts that he will not allow it to linger any longer as it happened in some countries for more than 50 years.

Buratai said: “We will not leave this insurgency to last like in other countries who have fought an insurgency for close to 50 years. We cannot allow that to happen here”,

“You may wonder that this counter-insurgency operation has lingered for too long, we all know globally that counter-terrorism is very complex. There are some countries that have fought counter-terrorism for close to 50years. But we’re not going to leave it, we will not leave this camp”

“We are here, we will not leave this camp until we substantially degrade these criminals. By God’s willing, we shall be there with you no going back once we commence. We will be with you in the valleys, on the hill, in the jungle, in the river and so on. As I speak now, we have some element that is providing us necessary intelligence and once we start, no going back. We are here and we make sure that we get ourselves properly motivated, properly equipped and I assure you will have the best of time.”

“Some of you have been here before like two-three times but I tell you are going to have the best of time. We want the best out of you. We need your courage and determination.”

“I want you to have at the back of your minds that Mr. President solidly behind you. We have already started getting the consignment of what we require for us to handle this insurgency and terrorism. It a matter of time and a very short time.

“If I ask you a question, will you answer me? The question is, is anybody ready to chicken out? and the troops responded with a thunderous NO.

He added: “We make sure that we never go back. Forward ever, backward, never. Thank you and God bless you all”.