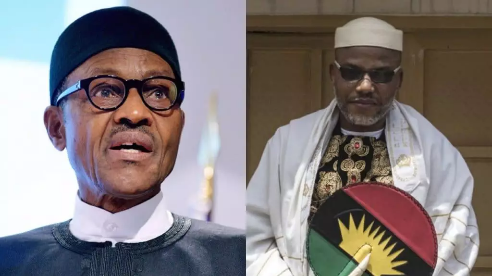 Nnamdi Kanu, the leader of the Indigenous People of Biafra, has alleged that the Presidential Villa is now being controlled by the Chinese Civil Engineering Construction Company.

The IPOB leader stated this following the statement credited to the Minister of Health, Dr Osagie Ehanire, that the Federal Government did not invite the Chinese doctors who entered the country last Wednesday to help with the fight against Coronavirus.

The Minister of Health stated this during an interview on Channels TV’s News at 10 on Saturday.

A 15-man COVID-19 medical team was invited to assist Nigeria in efforts to contain the pandemic.

Ehanire said, “I think in the first place we didn’t bring them in, and I think China Civil Engineering Construction Corporation (CCECC) in its own wisdom and probably in its own corporate social responsibility thought they should bring people in to come and help us and give advice.”

Kanu questioned the power a foreign company have to bring in their doctors into the country at a critical time like this and the Minister admitted the development.

“What we knew happened has now been confirmed. A government of scammers, forgers and fraudsters have been caught in their own web of lies. Confusion upon confusion lies upon lies, deceit upon deceit, fraud upon fraud, impunity upon impunity,” Kanu wrote on Facebook.

“Shamefully the Minister of Health has confirmed that a common Chinese Company based in Abuja are the people effectively in charge of their COVID-19 response and strategy which means the same Chinese people that are busy humiliating black Africans in their country are now the people running the government of Nigeria as I have always maintained.”

READ  Coronavirus: As US and China fight over origin of COVID-19, EU calls for independent probe

“Nigeria was formed by a British business venture by the name Royal Niger Company and today its dismemberment is being presided over by another business entity this time around the Chinese owned China Civil Engineering Construction Corporation (CCECC).”

“Its Executive Director Jacques Liao is the one now firmly in charge of the government of Nigeria in the absence of Abba Kyari and the rest of the Fulani looters.”

“Nigeria started as a business and has ended as a business enterprise. Funny enough it was from this same China that Frederick Luggard was recalled back to England and given the order to head to West Africa to take over the fledgeling colony from Royal Niger Company.”

“Ironically it is also from same China that another company CCECC has been mandated to preside over the end of Nigeria. The full cycle of life completed for the animal kingdom,” he wrote.