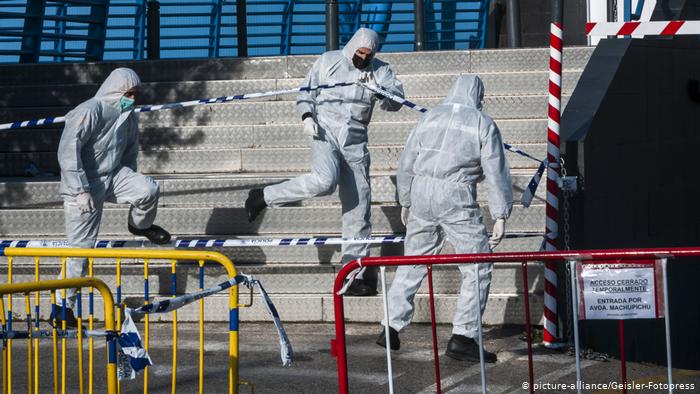 France confirmed that less patients entered its intensive care units for treatment for COVID-19 ahead of a speech by President Emmanuel Macron in which he is expected to extend the country’s month-long coronavirus lockdown.

France is the fourth-worst effected country globally after the U.S., Italy and Spain with over 130,000 cases and 13,832 deaths as of Sunday. “A very high plateau seems to be forming,” said medical chief Jerome Salomon in his daily briefing on the status of the coronavirus.

On Easter Sunday, thousands of churches across Europe, the U.S. and the world held ‘virtual’ services behind closed doors due to the virus.

It came as the U.S. passed Italy in the number of deaths from coronavirus, recording more than 20,000 fatalities and more than half a million confirmed cases. Italy currently has more than 150,000 cases and 19,000 deaths, and has extended its nationwide lockdown until May 3.

The U.K. saw a slight drop off in the daily death toll while Spain reported its lowest daily death count in three weeks on Saturday after 510 people died from the virus. Boris Johnson, the British prime minister, was released from hospital this weekend after contracting COVID-19.

In her first Easter message to the British people, Queen Elizabeth II said that the virus “would not overcome us” and urged Britons to keep apart and “keep others safe”.

Meanwhile in Asia, South Korea reported just 32 additional coronavirus cases over the past 24 hours, bringing the total number of cases to 10,512. The government of North Korea still claims to have not had a single case of the virus as yet, a claim that is disputed by experts.

From Venezuela to Vanuatu, almost half the world’s population remains locked down to avoid the spread of the virus, which has infected 1.8 million people worldwide and killed over 108,000. The worst infection rate has been seen in the U.S., where 529,951 have the virus.

On Sunday, AP reported that the White House had approved the production of 39 million N95 medical masks over the next 30 days.

Health workers ‘must not be sacrificed’

Dr Mike Ryan, who is the director of WHO’s health emergencies programme, stressed that building a health workforce took “a long time” and “should be protected.”

WHO director-general Dr Tedros Adhanom Ghebreyesus said he was “particularly concerned” about the large number of infections reported among health workers — in some countries up to 10% of health workers are being infected with COVID-19.

“This is an alarming trend. When health workers are at risk, we’re all at risk,” Dr Tedros said.