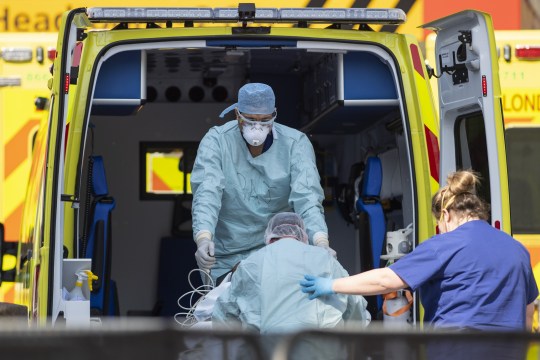 Another 917 people have died after contracting coronavirus, bringing the UK death toll to at least 9,875. This includes 823 deaths in England, with an 11-year-old becoming one of the country’s youngest victims of the Covid-19 outbreak.

Scotland reported 47 deaths today, taking the total number of fatalities there to 542, while 15 more people have lost their lives in Northern Ireland bringing the country’s total to 107.

The new figures – accurate as of 5pm on Friday – follow a massive rise of 980 yesterday and 938 on Thursday.

The number of people who have tested positive for the illness now stands at 78,991. The Department of Health and Social Care said 18,091 tests had taken place on 10 April.

It comes as 19 NHS workers are confirmed to have lost their lives in the pandemic. Matt Hancock said today it was a ‘heartbreaking story’ and it affected everyone in the NHS to see their colleagues pass away.

The health secretary insisted he was not aware of any link between lack of PPE and the deaths, but added that a full investigation would be carried out to understand how the health workers contracted the virus.

Alarming new figures from the Intensive Care National Audit and Research Centre (ICNARC) claim the death rate of patients admitted to intensive care with Covid-19 now stands at more than 51%.

However, a vaccine could be available as early as September, according to a leading Oxford professor who is involved in its discovery.

Sarah Gilbert, professor of vaccinology at Oxford University, says she is ’80 per cent’ confident that the vaccine her team are working on will be successful, with human trials set to take place in two weeks.

Professor Gilbert told The Times: ‘I think there’s a high chance that it will work based on other things that we have done with this type of vaccine.

There has been some confusion around the reporting of death tolls. This is because there are various public bodies all reporting figures according to different criteria each day.

On Tuesday, April 7, the Department of Health (DoH) said the UK coronavirus death toll had reached 6,159 after another 786 patients in hospitals died.

The government has said this difference is because each devolved authority often makes amendments to their data after releasing death figures to the DoH each day.

It is important to note that all of these deaths occurred in hospitals across the UK. They do not take into account the people dying at home, in care facilities, hospices, or other locations outside of hospitals.

Deaths outside hospitals are now being recorded weekly by the Office for National statistics (ONS). The latest figures from the ONS suggested the true coronavirus death toll could be 8% higher.

‘It’s not just a hunch and as every week goes by we have more data to look at… I would go for 80 per cent, that’s my personal view.’

Downing Street said on Saturday Boris Johnson was making ‘very good progress’ in his recovery from coronavirus after leaving the ICU.

Although there is no update on when the prime minister is to be discharged from St Thomas’ Hospital in London, he is said to playing games and watching films in hospital.

Britons have been urged by the government to ignore the sunny weather and stay indoors over the Bank Holiday weekend. However, many police forces complained on Friday of the ‘selfish few’ who are still flouting the rules.