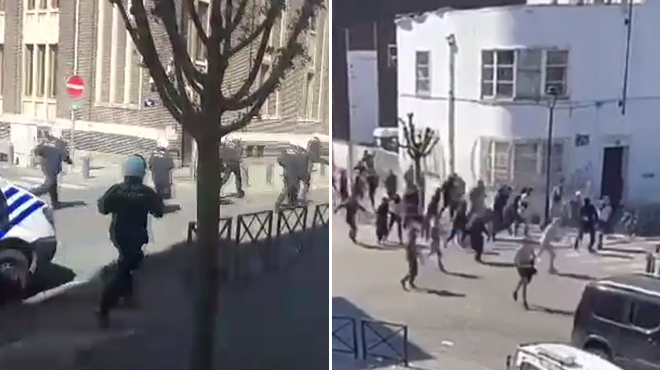 Youths in Anderlecht in Brussels clashed with police overnight after a young man died while trying to escape from a police control.

The clashes led to 45 arrests by Saturday evening. The troubles took place mainly around metro station Clemenceau and the Place du Conseil, where the town hall is situated.

The 19-year-old was riding a scooter when he was stopped by police for a check on his movements. He instead tried to escape, and later died when he drove into a police car while riding on the wrong side of the road.

The incident is being investigated by the Brussels prosecutor’s office.

In the meantime, the news of the accident brought a number of young men onto the streets in defiance of the lockdown, where they encountered a reinforced police presence.

A running battle ensued, with youths throwing stones and police responding with baton charges. Several cars were set alight, and one witness video showed a masked youth running off with what appears to be a police firearm lifted from a police van, firing it into the air.

The family of the dead youth, named as Adil, intervened to appeal for calm.

“Adil was a very calm young man, always smiling and full of life,” his aunt told Sudinfo. “He was liked by everyone, his family, his friends. He was a boy without problems, a diabetic of fragile health.”
The rioters, she said, were all young.

“They are carefree, for sure, but all we ask for now is for them to allow us, his family, to mourn his passing.”

The mayor of Anderlecht, Fabrice Cumps, said the idea of mourning was far from the minds of the trouble-makers.

READ  Jega: Prediction On Nigeria’s Breakup May Be Fulfilled

“One thing is for sure, they didn’t come here to mourn the memory of young Adil. They came here to cause a riot, they came to cause violence. Their motivation is very clear.”

By the early hours of the morning the situation had settled, with the presence of reinforcements from the federal police for the local force of Zone Brussels-South, including police vans and water cannon.

Police chief Patrick Evenepoel said the situation was “under control,” but that police were ready to intervene if the violence started up again.

Riots have broken out today in the #Anderlecht district of #Brussels in Belgium following a fatal accident between a police vehicle and a scooter during a police chase.pic.twitter.com/oCDxSxnDIL