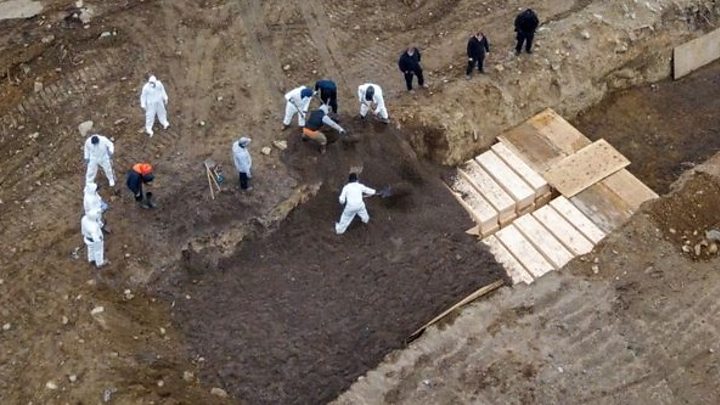 The US has become the first country in the world to record more than 2,000 coronavirus deaths in a single day.

Figures from Johns Hopkins University show 2,108 people died in the past 24 hours while there are now more than half a million confirmed infections.

The US could soon surpass Italy as the country with the most coronavirus deaths worldwide.

But experts on the White House Covid-19 task force say the outbreak is starting to level off across the US.

Dr Deborah Birx said there were good signs the outbreak was stabilising, but cautioned: “As encouraging as they are, we have not reached the peak.”

President Donald Trump also said he expects the US to see a lower death toll than the initial predictions of 100,000 fatalities, adding: “We’re seeing clear signs that our aggressive strategy is saving countless lives”.

Brazil became the first country in the southern hemisphere to surpass 1,000 deaths with coronavirus

Turkey ordered a 48-hour curfew in 31 cities – including Istanbul and Ankara – to start at midnight. The announcement, made just two hours before the curfew was due to start, sparked panic buying and crowds of shoppers

Aid agencies expressed alarm after the first virus case was confirmed in Yemen, where years of civil war have devastated health systems

What are the latest US figures?

The US now has at least 18,693 deaths and 500,399 confirmed cases, according to Johns Hopkins, which is tracking the disease globally. About half of the deaths were recorded in the New York area.

Italy has reported 18,849 deaths while globally more than 102,000 people have died with the virus.

Researchers had predicted the US death toll would hit its peak on Friday and then gradually start to decline, falling to around 970 people a day by 1 May – the day members of the Trump administration have floated as a possible date to start reopening the economy.

READ  China says it is a victim of COVID-19 disinformation, not an initiator

“I want to get it open as soon as possible,” Mr Trump said at a Good Friday briefing at the White House. “I would say without question it’s the biggest decision I’ve ever had to make.”

However, no action would be taken until the government knew the “country [was] going to be healthy”, he said. “We don’t want to go back and start doing it over again.”

The coronavirus has changed everything about life, and now it’s upending the rituals of death.

New Yorkers have been shocked by the grim scenes: ambulances constantly blaring down eerily deserted streets, body bags being forklifted into refrigerated trucks outside hospitals and now new trenches being dug on Hart’s Island for possible mass burials.

The remote cemetery, accessible only by boat, is a place regarded historically with sorrow because of its mass graves with no tombstones, just unclaimed bodies. The city’s morgues can only handle so much before temporary burials for Covid-19 victims, once an absolute worst-case scenario, become necessary.

Funeral directors talk openly about how scared and depressed the spiking death toll has left them. Even before this week’s record number of deaths, some families have had to wait a week or more to bury and cremate their loved ones.

Dr Anthony Fauci, US infectious diseases chief, concurred that the country was “starting to see the levelling off and coming down” of cases and deaths. But despite the “important advance”, he added, mitigation efforts such as social distancing should not be pulled back yet.

A new projection by the Institute for Health Metrics and Evaluation at the University of Washington forecast 60,000 deaths by 4 August assuming that those restrictions remain in place. Last month, Dr Fauci estimated at least 100,000 deaths.

Also at the briefing, Dr Birx noted that the rate of increase appeared to be stabilising in hard-hit regions like New York, New Jersey and the city of Chicago.

She added that the US mortality rate was “significantly less than many of the other countries, when you correct them for our population”. But she emphasised the nation had yet to see the peak of the outbreak.

On Friday, New York Governor Andrew Cuomo said the latest data showed the state was successfully “flattening the curve”, but also cautioned that it was too early to relax social distancing measures. “Even though it’s a grind, even though it’s difficult, we have to stay with it.”

The danger appears to be highest for America’s minority communities, which have been disproportionately affected by Covid-19.

Killed by a virus he thought had been overhyped

I’m using my pizza oven to toss masks for nurses

Why some US churches are still open this Easter

Apple and Google team up for coronavirus tracking

Dr Jerome Adams, the US surgeon general, said the trend was “alarming, but not surprising” given that minorities in the US generally had more chronic health conditions such as asthma, hypertension and diabetes.

“As a matter of fact, I have been carrying an inhaler in my pocket for 40 years out of fear of having a fatal asthma attack,” continued Dr Adams, who is African-American.

But he caused controversy by urging minorities to stop drinking, smoking and taking drugs to reduce their risk. He was particularly criticised for his use of colloquial language, when he told them to respect social distancing guidelines.

In Friday’s briefing, Mr Trump also said he had seen the drone images of coffins being stacked in a mass grave on New York’s Hart Island. Officials there say the island, which has been used to bury people with no next of kin for over 150 years, is now burying bodies at five times the normal rate.

Earlier in the day, Dr Fauci told CNN that officials are currently discussing whether to adopt immunity certificates for Americans who have safely survived the coronavirus and have antibodies in their blood to prove it.

The certificates might “have some merit under certain circumstances”, he said, adding that antibody tests would be available next week.

Meanwhile, in Washington lawmakers are considering a “Covid-19 heroes fund” to provide direct payments to workers on the front line of the pandemic.

The Democratic-led proposal calls for a $13 (£10) hourly rate, on top of the pay that workers already receive from their employers. Payment would be capped at $25,000. The money would go towards nurses, doctors, grocery store clerks, transit workers and other workers deemed essential.