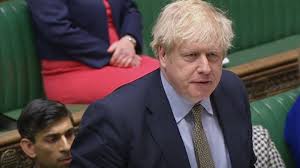 The UK’s Prime Minister Boris Johnson was “stable” overnight in intensive care, where he has received oxygen treatment for symptoms of coronavirus.

He is not currently on a ventilator but is receiving “standard oxygen treatment” and is breathing without other assistance, his spokesman said on Tuesday.

In a statement, the spokesman added the 55-year-old had not been diagnosed with pneumonia.

“He has not required mechanical ventilation or non-invasive respiratory support,” he said.

Johnson was moved to an intensive care unit on Monday night after his condition “worsened”, a Downing Street spokesman said, adding that he had asked Foreign Secretary Dominic Raab to deputise “where necessary”.

He was initially admitted to hospital on Sunday due to persistent symptoms of COVID-19, which he was diagnosed with more than a week ago.

For more on this story and coronavirus across Europe, follow our live blog below:

More than 100 deaths in Sweden in last 24 hours

Sweden’s health agency has reported 114 deaths from coronavirus over the last 24 hours.

The agency said the number comes partly from revised figures for the last few days.

Sweden has adopted a much less restrictive approach to containing the virus than the majority of its neighbours, and

with 591 deaths from 7,693 cases it counts a higher mortality rate than its Nordic neighbours.

The UK’s prime minister is “stable” and in “good spirits” following a night in intensive care, Downing Street has said.

UPDATE: Prime Minister @BorisJohnson is “stable” and in “good spirits” after a night in intensive care at St Thomas’ Hospital, Downing Street has said – PA

Nearly three quarters of those deaths have been in Europe, where Italy and Spain have the highest (16,523) and second highest (13,798) death tolls respectively.

Europe’s response to the Corona virus has been “poor” and uncoordinated, and now is the time for “solidarity”, says Irish Prime Minister, Leo Varadkar.

“This is a symmetric recession – it’s affecting everyone, if ever there was a time for Europe to have a coordinated common response based on solidarity it is now,” he told Euronews.

Ireland, alongside several eurozone countries including Italy, Spain, Portugal and France, has called for the creation of Corona bonds – a form of joint risk and debt issuance among countries that use the Euro.

However, he admits debt mutualisation “is not something that all member states can accept” and says the eurozone’s bailout mechanism the ESM should be modernised and provide cheap money to member states.

Meanwhile Russian President Vladimir Putin sent a telegram to Johnson, saying: “I would like to express my sincere support at this difficult moment for you. I am sure that your energy, optimism and sense of humor will help to defeat the disease. I sincerely wish you a speedy and complete recovery.”

Chancellor #Merkel wishes @BorisJohnson much strength and a speedy recovery and hopes that he can leave hospital soon. pic.twitter.com/kjcNsVUwsM

Paris has announced a ban on all individual sports activities in the city between 10:00 am and 7:00 pm from Wednesday.

The capital is the first city in France to tighten containment measures after the government’s call on Monday evening not to relax efforts to combat the coronavirus, which has caused nearly 9,000 deaths in the country.

UK Cabinet Minister Michael Gove has gone into self-isolation, after a family member showed symptoms of COVID-19. This morning he was updating the media about the condition of the Prime Minister Boris Johnson, who is in intensive care in hospital.

Many thanks for kind messages. In accordance with the guidance, I am isolating at home after a member of my family started to display mild symptoms of coronavirus on Sunday. I have not displayed any symptoms and am continuing to work as normal. #StayHomeSaveLives

The Ministry of Health has just released the figures for Tuesday, and new cases and deaths are again on the rise. It reported 5,478 new cases in the last 24 hours, as opposed to 4,273 on Monday, and 743 dead, as opposed to 637.

There have now been more than 140,000 confirmed cases in Spain, and 13,798 deaths – the world’s second highest tally after Italy.

The British monarch has thanked healthcare staff on the frontline against coronavirus for their “selfless commitment and diligence” in message for World Health Day.

She added: “In testing times, we often observe that the best of the human spirit comes to the fore; the dedication to service of countless nurses, midwives and other health workers, in these most challenging of circumstances, is an example to us all.

“My family and I send our enduring appreciation and good wishes.”

Nadine Dorries, who recently recovered from COVID-19 herself, said the UK prime minister “was more concerned about the health of others” when she last spoke to him.

I last spoke to Boris a few days ago and was in regular contact by phone. He’s a fighter and it’s fair to say, he was frustrated at not being able to bounce back quickly, but unsurprisingly, more concerned about the health of others who are suffering from #COVID19 #PrayForBoris