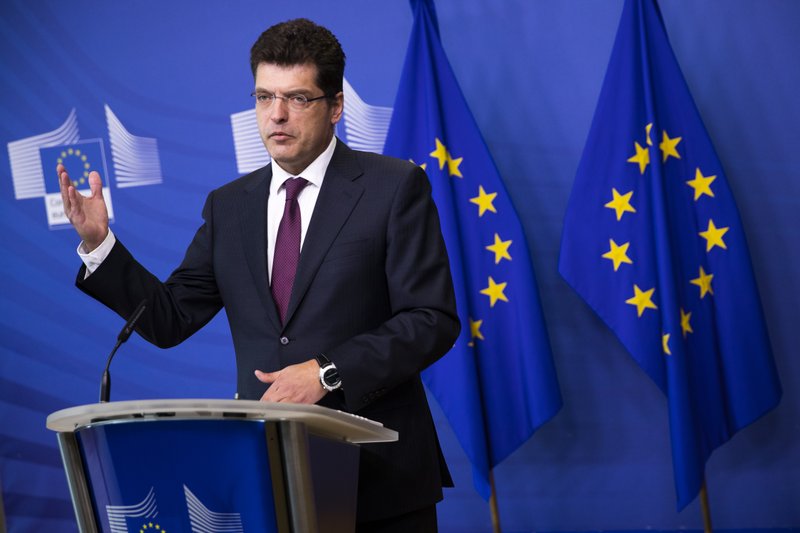 The Latest on the coronavirus pandemic. The new coronavirus causes mild or moderate symptoms for most people. For some, especially older adults and people with existing health problems, it can cause more severe illness or death.

TOP OF THE HOUR:

— Indonesia predicts 95,000 virus infections by the end of next month.

That comes after the number of new hospitalized patients across the country went down for a fifth consecutive day. Most tests have been done on seriously ill people.

Emmanuel Andre, a scientist and spokesman at the COVID-19 crisis center, says 314 people were hospitalized on Monday in Belgium, the lowest tally since March 25.

Andre says the country’s testing capacity has been massively increased in recent weeks, an evolution likely to benefit Belgium’s 1,500 nursing homes. He says health care personal and residents will be tested.

LONDON — British Prime Minister Boris Johnson remains in stable condition in an intensive care unit and has not been put on a ventilator.

Johnson spokesman James Slack says “the prime minister has been stable overnight and remains in good spirits. He is receiving standard oxygen treatment and is breathing without any other assistance.”

He said Johnson was not receiving mechanical ventilation and does not have pneumonia.

Johnson was admitted to St. Thomas’ Hospital late Sunday with a fever and cough that persisted 10 days after he was diagnosed with COVID-19. He was moved to the intensive care unit Monday evening after his condition worsened.

BERLIN — Germany’s national disease control center has launched a new app that it says it hopes will help scientists better understand the spread of the new coronavirus by analyzing users’ smartwatch or fitness band data.

The Robert Koch Institute called on volunteers to install the “Corona Data Donation” in a pilot project. It says smartwatches and fitness bands record resting heart rates, sleep patterns and the level of activity of their users, and “in the case of acute respiratory illness, these vital signs change significantly in most cases.”

Wieler stressed that the app is not a diagnostic tool for people to use to self-test for the coronavirus. The institute is hoping for 1 million people to sign up, about 10% of the population.

Germany has reported more than 100,000 cases of the coronavirus and more than 1,800 deaths.

LISBON, Portugal — Portugal’s president estimates that the worst of the coronavirus outbreak in his country will be over by the end of April.

President Marcelo Rebelo de Sousa told public broadcaster RTP there can be no “decompression” of restrictions until May, in reference to government orders for almost everybody to stay indoors.

The head of state has placed Portugal in a state of emergency through April 17. He warns If people let down their guard now, there could be a relapse.

ATHENS, Greece — Hospital doctors have staged protests around Greece to press demands for the government to hire additional medical staff and use more resources from the private sector.

Doctors and other staff members led the silent demonstrations Tuesday at the front entrance of Greece’s largest hospital in central Athens, wearing surgical and protective gear.

Holding up banners reading “We fight for you. Shout for us,” the doctors said more resources were needed to deal with the pandemic in Greece. The national coronavirus death toll reached 79 on Monday and still remains below the number of fatalities attributed to seasonal flu.

The protests were held outside more than a dozen hospitals, organized by the national hospital doctors’ union. It also had the backing from the Greek Communist Party, which sent lawmakers to several of the demonstrations.

MADRID — Spain is recording again a rise of daily coronavirus infections and deaths for the first time in five days, a result consistent with previous Tuesdays when a weekend backlog of tests and fatalities are reported.

With 743 new deaths in the last 24 hours, some 100 more than the fatalities seen from Sunday to Monday, Spain’s death toll neared 13,800 since the beginning of the pandemic, Health Ministry data showed. The total of confirmed infections rose over 140,000, with 5,478 new ones on Tuesday, 1,000 more than on Monday. Both figures had been declining since April 2.

Authorities have said flattening of the contagion arc will be a long process but they have pinned hopes in how pressure is easing in hospitals, mostly in emergency wards.

As part of deescalating measures being debated for coming weeks, Spain’s left-wing government wants to test 30,000 households to draw the national map of the outbreak. The goal is to measure how much has the virus spread beyond hospitals and nursing homes, which had become big contagion clusters.

Prime Minister Pedro Sanchéz’s Cabinet is expected to approve Tuesday new measures to cushion the economic and social impact of the pandemic, including subsidies for farmers and flexibility to temporarily hire migrant workers for harvesting vegetables and fruits.

PHNOM PENH, Cambodia — Cambodia’s leader says he is ordering a ban on exports of rice and fish to ensure there are no local shortages of the staple foods during the coronavirus crisis.

Prime Minister Hun Sen said he wanted to make sure there was a sufficient supply of salt and noodles as well. He appealed to Cambodians to plant vegetables and other crops to supply local markets “during this difficult time.”

Expensive gourmet varieties of rice that Cambodia has contracts to sell abroad are exempted from the export ban.

Hun Sen also announced that the Lunar New Year holiday scheduled for April 13-16 has been canceled to reduce the risk of people spreading COVID-19.

Hun Sen in February had been skeptical that the coronavirus would impact Cambodia, but as cases mounted he has imposed restrictions on gatherings and travel and welcomed medical assistance and experts from China.

JAKARTA, Indonesia — Indonesian government has been forecasting the new coronavirus may infect about 95,000 people in the country by next month as the virus was spreading rapidly.

Finance Minister Sri Mulyani Indrawati revealed the dire estimation during a hearing with the House’s Commission XI, which overseeing economic issues at the parliament on Monday to discuss strategic steps needed to curb the peak of the virus transmission.

She says the estimate was discussed at a cabinet meeting held by President Joko Widodo earlier based on a projection by the country’s intelligence agency and academic experts.

Widodo has declared a national health emergency and ordered large scale social distancing to contain the spread of the new coronavirus in the archipelago nation, which is home for nearly 270 million.

While Indonesia’s death toll from the new coronavirus outbreak at 221 on Tuesday, it marked the highest in Asia after China.

LONDON — British Prime Minister Boris Johnson has spent the night in an intensive care unit of a London hospital after his coronavirus symptoms dramatically worsened.

Cabinet Minister Michael Gove told the BBC that Johnson was receiving oxygen but was not on a ventilator.

The 55-year-old Conservative leader was admitted to St. Thomas’ Hospital late Sunday, 10 days after he was diagnosed with COVID-19, the first major world leader to be confirmed to have the virus.

He was moved to intensive care after his condition deteriorated Monday.

Britain has no official post of deputy prime minister, but Foreign Secretary Dominic Raab has been designated to take over should Johnson become incapacitated.

Kwon Jun-wook, an official from South Korea’s Centers for Disease Control and Prevention, says the guideline will draw from the country’s experience with similar treatments on patients who contracted the MERS virus during an outbreak in 2015.

Middle East Respiratory Syndrome, discovered in 2012, is caused by a coronavirus in the same family as the common cold, SARS and the new virus that’s causing the COVID-19 illness. The 2015 outbreak killed 36 people and sickened nearly 200 in South Korea.

Kwon says officials were examining recent recoveries of two elderly COVID-19 patients at a hospital in Seoul who had been infused with survivors’ plasma — the liquid part of blood that contains antibodies — after other treatment attempts failed to improve their conditions.

He cautioned there’s still no guarantee that plasma treatment will work, and that health authorities and civilian experts are continuing to debate its effectiveness.

COPENHAGEN, Denmark — Denmark says it is planning to reopen next week kindergartner and primary schools for pupils up to age 11 in a gradual lifting of the country’s coronavirus lockdown.

Prime Minister Mette Frederiksen says late Monday that her government planned opening schools for younger students up until class five because the requirement to care for them represented a greater burden on society. Reopening is planned for April 15.

Denmark will keep in force border controls and ban gatherings of more than 10 people at least until May 10.

Frederiksen stressed the announced gradual easing of the lockdown would take place only if the number of confirmed COVID-19 cases remains stable and there is no major hike by Easter.

BEIJING — China and Russia are closing their land border and river port near Vladivostok following the discovery of 59 confirmed cases of the new coronavirus among Chinese citizens returning home via the crossing.

Beginning Tuesday, all Chinese citizens who arrive in the border region aboard Russian domestic flights will be forced to undergo a 14-day quarantine, according to a notice posted on the website of the Chinese consulate in Vladivostok.

Only those holding special passes will then be permitted to travel on the Russian side of the border area, the notice said. It wasn’t clear whether pass holders would be able to cross into China.

In addition, all guesthouses, nursing homes, on the Russian side of the border area will also be closed to outsiders through June 1.

JOHANNESBURG — The African continent now has more than 10,000 coronavirus cases. That’s according to the Africa Centers for Disease Control and Prevention.

Fifty-two of Africa’s 54 countries now have the virus, with island nation Sao Tome e Principe the latest to confirm cases.

Only the small kingdom of Lesotho and the island nation of Comoros have not confirmed cases. South Africa has the most cases on the continent with more than 1,600.

The shortage of testing capabilities across the continent has raised concerns that the number of actual cases in Africa could be higher.

MOSCOW — Russian authorities registered more than 1,000 new coronavirus cases in 24 hours for the first time since the beginning of the outbreak.

The government coronavirus task force reported 1,154 new cases on Tuesday, bringing the country’s total caseload to 7,497, with 58 deaths and 494 recoveries.

The epidemic in Russia picked up speed in March, with the number of cases growing exponentially and doubling every few days.

In order to curb the outbreak, Russian President Vladimir Putin ordered everyone to stay off work this month, with only essential businesses, such as grocery stores and pharmacies operating.

The vast majority of Russian regions are currently on lockdown, ordering residents to self-isolate at home and not go out, unless it’s to buy groceries, medications, walk their dogs or take out trash.