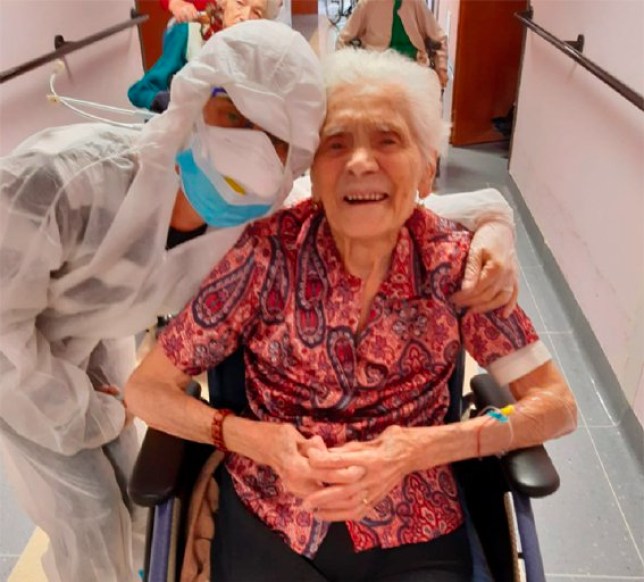 An Italian grandmother has become the oldest person in the world known to have survived coronavirus after beating it at the age of 104.

Ada Zanusso – who also survived the Spanish Flu pandemic 100 years ago – fought against the deadly infection at her care home in Biella, northern Italy, after falling ill on March 17.

The mother of four suffered with vomiting, fever, and difficulty breathing before testing positive for Covid-19. But after recovering from the life-threatening illness, her doctors said it was a ‘sign of good hope’ for the country that has become the worst hit by the global pandemic.

Her son Giampiero said he had suspected his mother had contracted the virus after 20 other residents at her care home died from Covid-19. ‘They have sadly had a few fatalities there,’ he told the Sun.

‘But she has now recovered well and the doctors think she is the oldest person in the world to recover.’

Ada survived the Spanish flu, which filled some 50 million people across the globe, when she was just a small child.

Carla Furno Marchese, Ada’s doctor, said: ‘She is up and about and not lying in bed and she can walk to her chair.

‘She has lost none of her lucidity and intelligence. Her recovery is a great joy for us and a sign of good hope for all that are suffering in these difficult days.’

Her recovery comes as Italy announced its lowest daily death increase in two weeks. A further 525 people were confirmed to have died from coronavirus in the European epicentre on Sunday, just over a week on from the country’s darkest day, when 969 people died, including 44 doctors, within 24 hours.

It is hoped the country has hit a turning point, as the total number of people hospitalised has fallen from 29,010 to 28,949, following a second daily decrease in the number of intensive care beds in use. Italy’s total death toll now stands at 15,887, Italian authorities confirmed.